MASON TOWNSHIP — An Elkhart resident was saved from a burning vehicle in Cass County Monday morning, according to the Cass County Sheriff’s Office.

Sheriff Richard Behnke reported that deputies of the Cass County Sheriff’s Office responded to a one car traffic crash on Redfield Street near Maple Glen Drive in Mason Township around 7 a.m. Monday.

Initial calls to Cass County Dispatch stated the pick-up involved had hit a tree and was on fire. Callers also stated the driver was trapped in the vehicle. 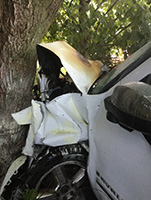 When a deputy arrived on scene, she found the driver trapped and the vehicle was on fire. With assistance of Ontwa Township police, the driver was assisted out of the vehicle via a rear window and was unhurt. The officers then extinguished the flames.

Investigation of the crash showed the driver, Scott Stoneburner, 57, of Elkhart, was experiencing a medical issue and lost control of his pick-up.  No one was hurt in the incident. Stoneburner was wearing a seat belt and alcohol was not a factor in the crash, according to officers.

Assisting on scene were the Porter Township Fire Department and SEPSA Ambulance.

NOVAK: College football season is on the brink