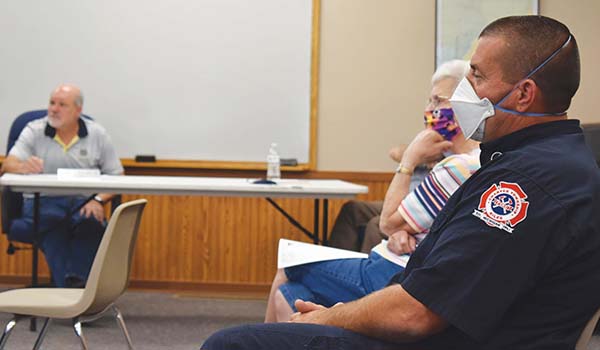 NILES CHARTER TOWNSHIP — Both firefighters and fire code were the center of discussion Monday evening during the Niles Charter Township Board of Trustees’ regular meeting.

A new fire code was introduced with a public hearing set for the Aug. 17 regular meeting, and three firefighters were in attendance from the Niles Township Fire Department to be recognized and appointed in duties for August.

Three volunteer firefighters were recognized for achieving their state certifications with the Niles Township Fire Department, and an acting fire chief for the department was appointed as Chief Gary Brovold hung up his gear when he retired from the position on Aug. 1.

Trustees Chris Vella and and Herschel Hoese were not in attendance, though with five members present, it was determined to be a quorum.

Jimmy Toth and Jacob Serdel were in attendance at the meeting and had been hired as volunteer firefighters for the township’s fire department and completed their class. Kim Schultz passed certification, but was not in attendance.

“These people have been outstanding,” Brovold said of the new volunteer firefighters, in a previous interview.

The three firefighters have been recognized as completing their state certification tests.

Josh Sherrick was appointed as acting chief for the month of August by Brovold as he left, and was approved by the board of trustees on Monday evening.

“[Sherrick] knew that anytime Gary [Brovold] wasn’t going to be here, whether it was vacation or whatever, he appointed him acting chief,” said township treasurer Jim Ringler.

Ringler said the township board will likely move into the process of hiring another full-time fire chief for the Niles Township Fire Department after the November election.

“We’ll probably rotate some of the full-time, paid staff as acting chief,” Ringler said. “Most of them have served as acting chief throughout the last eight to 10 years.”

According to Sherrick, he has been with the township’s fire department for about 10 years.

Another item on the agenda was introducing township ordinance #85.

The 23-page ordinance to be adopted is the updated fire code. It will be posted on the Niles Charter Township’s webpage, and will be open for public hearing and comments at the board of trustees next meeting at 6 p.m. on Monday, Aug. 17. Members of the public and residents of the Niles Township will be able to ask questions and voice any concerns.

The ordinance is an update to the existing fire code. According township clerk Terry Eull, ordinance #85 includes regulations on existing structures and businesses, as well as things like firework displays.

“Are there time frames for all of this stuff to be completed?” he asked. “It sounds like it applies to existing businesses and new businesses as well.”

According to Eull, it could be voted on and go into effect at the Aug. 17 meeting.