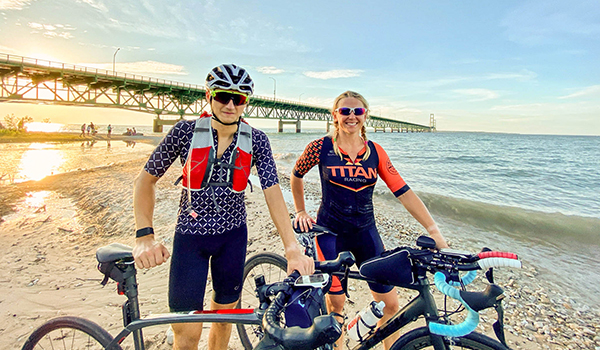 Not all riders had the same goal in mind of completing the just over 373-mile journey. Some wanted to attempt a 24-hour ride, and others just wanted to see how far they could go. A few in the group wanted to ride along as support to aid in making the ride easier for those making the longest push.

Two cyclists finished the entire journey, Keri Pawielski and Ian Martzke, both of St. Joseph. They had already completed one ride across the state, after participating in the Coast to Coast Gravel Grinder ride. After having a personal map of themselves doing the route from Lake Huron to Lake Michigan, Pawielski said she wanted a map of achievement going north as well.

“It’s a silly reason, but it’s also fun to challenge yourself,” she said.

The ride was put together after discussions among friends and fellow riders.

“David and I started talking in the spring, and thought it would be cool to ride our bikes for 24-hours and see how far we could go,” Tuthill said.

Trapp said prior to the conversation with Tuthill, he had spoken with Pawielski about riding to the Mackinac Bridge. They decided to combine the ideas. Trapp said if the riders took longer than 24-hours to reach the bridge, they would just keep pushing. If they reached the bridge in 24-hours, they could map a new path if needed.

They decided to start in the evening and ride into the night while the riders would still feel more energetic.

“We were on super back roads and barely saw any cars. We all had super bright lights,” Trapp said. “The first 100 miles, we had a group of eight people who just wanted to do 100 miles with us to kind of help us through that first part.”

The riders who completed the first 100 miles were picked up by another car traveling along with the group. The car carried food and water supplies for the group.

The night portion of the route was new to many of the riders.

“I was worried about riding through the night because I had never done that before,” Pawielski said. “I remember looking at my watch, and it was 3:30 a.m. I just thought ‘There’s going to be dawn around 5:30 a.m. The sun will be up, and then I’m going to be fine.”

The sunrise came, and she was able to mentally refocus her ride.

For Tuthill, around 3 a.m. was also a difficult portion of the ride when his exhaustion and sleep deprivation set in.

“It was really cool. Riding through the night was kind of a weird experience,” he said.

Tuthill said at one point, after riding through the night for hours, he started to think the moonlight on the road looked like snow.

“Outside of that, it was just cool to see the whole state, essentially,” Tuthill said.

Trapp was in charge of mapping the group’s route to the finish point. He used four different websites and software to map out a route to try to avoid heavily trafficked roads, gravel and dirt paths, and towns with an abundance of stop lights.

“Fortunately, it was night time [when we started] so there wasn’t any traffic at all,” Trapp said. “We were just trying to stay out of town. Otherwise we would waste energy slowing down and speeding up.”

After one of the few busier stretches of road in the route, completing 265 miles of the route, Trapp decided to call his attempt.

The furthest Trapp had ridden before this route was 146 miles.

Tuthill bowed out of the ride around 200 miles in. He had ridden from St. Joseph up to Mackinac Bridge before, but had broken the trip up on his bicycle over 3.5 days and camped along the way.

“Ian and Keri those guys are animals,” Tuthill said, “They crushed it. They did an amazing job, and were able to ride the entire way. It was neat to see and be a part of.”