NILES — Four cold-blooded animals arrived on Friday to the Summer My Way program. Students watching the animals grew wide eyed as they watched them eat and learned about their habitats in Berrien County.

At the YMCA’s Summer My Way program, hosted at Northside Child Development Center, 2020 N. Fifth St., Pelc arrived to teach second through fifth graders about four animals they might see outdoors. Pelc brought with him a garter snake, a salamander, a toad and a painted box turtle to give a fun, educational finish to the program’s Nature Week.

“I brought a few live animals with me today,” said Derek Pelc, chief naturalist from the Love Creek County Park. “In years past, I’ve had [students] touch the animals, but this year, with everything going on, we won’t be doing that because you can’t disinfect animals.”

Still, with each introduction of a new animal, they were taken out of their enclosures and either held by the expert or sat on the table. Students sitting in the grass stood up as the animals were presented to get a closer look at each one.

In a break from tradition in years past, the amphibians and reptiles were not touched by the students, just by their caretaker. The students’ in attendance had to take the caretaker’s word that snakes were not slimy.

In previous presentations, Pelc would let everyone know how the animals felt and allow some students to pet them. COVID-19 precautions and mandates currently in place changed some of this year’s presentation including any touching of the animals. The presentation was hosted outdoors on the school lawn to create a safer gathering for everyone.

There were still some hands-on elements at the end of the presentation. Curious students could come to the table in their class groups to feel a shed snake skin and hold the turtle shells Pelc brought with him.

The amphibians and reptiles he brought to present to the Summer My Way students for the end of their themed Nature Week drew lots of reactions, questions and discussions.

Pelc explained that all of the animals shared a specific trait.

“They are similar in the fact that they are both cold-blooded,” he said. “That’s the main thing that classifies them as reptiles and amphibians.”

Students from the second, third, fourth and fifth grade classes volunteered their own stories and questions about each one of the amphibians and reptiles shown. Seeing the animals in front of them, many students asked about the longest snakes in the world and other reptiles, including alligators. A few asked why they had never seen the animals themselves, and others had stories of coming across them in the wild.

Pelc gave food to each one of the animals except for the Eastern Garter Snake, which only eats mice. Deciding things were already odd enough this year, Pelc decided the snake would eat after the presentation.

A member of the YMCA team for Summer My Way, Janie Townsend, was excited to see the students’ reactions. With two more weeks left in the summer program, Townsend said the following week would be themed as “Innovation Creation,” and the last week will be “Bummer, End of the Summer.

Column: Still a lot to play for Friday night 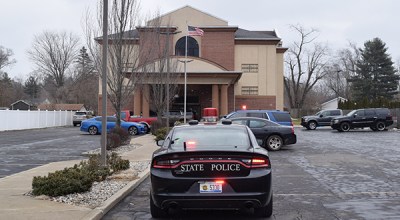