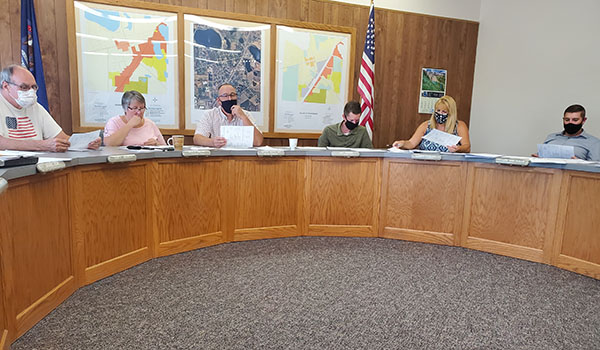 Monday, the village council voted to uphold its decision to provide operating licenses to NoBo Michigan and Alvarez Cultivation. The vote comes after the two companies were previously chosen during the council’s May meeting. However, after concerns were raised with the village’s merit-based scoring process and the proceedings surrounding it, the village rescinded its approval to NoBo and Alvarez and rescored its marijuana license applications in a series of meetings hosted last week. The results remained the same, with NoBo and Alvarez achieving the top scores and being awarded licenses.

The resolution to award NoBo and Alvarez licenses again was approved 6-1, with trustee Kellen VanHulle voting against.

Despite Monday’s vote and the rescoring of applications, the village faces backlash, with applicants accusing the council of violating the law and its own ordinance.

Following the May meeting, two lawsuits were filed against the village by law firms representing cannabis companies that had applied for licenses in the village.

The first was filed June 22 by attorney Kevin Blair, of Honigman LLP, on behalf of Attitude Wellness, LLC, which applied for and was denied a license to operate a medical marijuana provisioning center in the village. The lawsuit alleges that the village council violated the Open Meetings Act by hosting a closed meeting where it was decided which facilities would be chosen and by failing to record minutes from that meeting.

The complaint further alleges that the village’s process violated rules set by the Marijuana Regulatory Agency. According to the Michigan Regulation and Taxation of Marihuana Act, “[A municipality] shall decide among competing applications by a competitive process intended to select applicants who are best suited to operate in compliance with this act within the municipality.”

The lawsuit alleges the village violated this act by considering factors beyond which company would be best suited to comply with the law, such as integrity, moral character and cooperation level with the village.

“We believe some of the scoring used by the village does not necessarily comply with that requirement,” said Doug Mains, an attorney with Honigman, during Monday’s meeting. “Certainly, things like charitable giving or community involvement or rehabilitating dilapidated properties within the community are all noble endeavors and are things any responsible business is going to engage in, but those aren’t criteria specifically designed to identify which applicants are most likely to comply with the law.”

The second lawsuit was filed July 8 by lawyers Michael DiLaura, Jacqueline Langwith and Megan Callahan, of Pollicella PLLC, on behalf of Lake Effect Group LLC and BRT Capital 3 LLC. The lawsuit lists both the village of Edwardsburg and Dawn Bolock, zoning administrator, in her individual capacity, as plaintiffs.

In addition to alleging violations of the Open Meetings Act, the lawsuit claims the village violated its own ordinance by accepting applications in a shorter time frame than the 30 days called for in the ordinance. Additionally, the lawsuit claims there is evidence that the scoring used in the original round was “arbitrary and not based on the actual merit of the applicants.”

The second complaint also argues the village violated its own ordinance by appointing six officials to review applications when the ordinance calls for three. It states one of the six on the ad hoc committee was Bolock, who lacked the authority to review applications. The lawsuit claims Bolock stands to financially gain from the approval of NoBo Michigan through property sale or lease, and as such, awarded NoBo a higher number of points than other applicants.

Bolock declined to comment on the lawsuit, saying the matter is in the hands of attorneys.

Edwardsburg Village Council President Scott Mackling said Bolock was not involved in the new scoring process, and the three officials who reviewed the applications were himself, Trustee Dennis Peak and Paula Ralph, village clerk.

Mackling said the applications were rescored in response to the accusations of the violation of the Open Meetings Act, and Ralph said the scoring criteria was revised in the second round of reviews to make for a tighter process.

What happens next has yet to be seen, but DiLaura, the attorney who filed the July 8 complaint, expects to see a hearing in the coming weeks.

“At the end of the day, if you put the cannabis aside, there was a lack of transparency,” DiLaura said. “What we are trying to do is shed some light on a fairly murky process. We merely want the city to act with transparency and follow the ordinance that they themselves have drafted.”