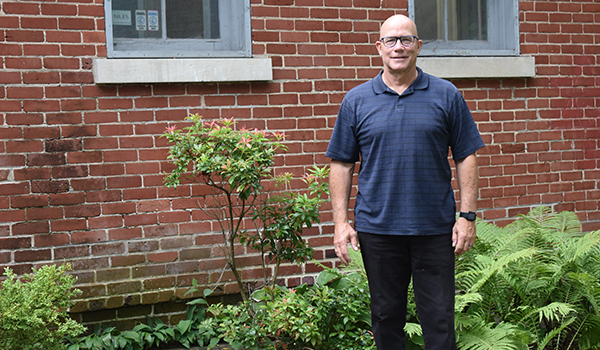 NILES — Standing outside of the Ferry Street Resource Center, 620 Ferry St., executive director Ric Pawloski is on the sidewalk speaking to a man in a truck. It is an hour before the center opens, and he is hearing the man’s story and what sort of assistance he is looking for. Pawloski walks inside after finishing the conversation, letting him know to come back in an hour when the doors open.

Entering the center, Pawloski thinks about what the man had told him. The wheels are already turning in his head on who he can connect the man with for assistance.

“We try to do what we can to either help directly or connect to people who can help,” Pawloski said.

With COVID-19 precautions and mandates, and a limited staff, Pawloski has seen the needs from residents growing in the Niles area community. Housing has become more precarious for people in need, as many have experienced their usual places limiting the number of people staying in a shared home. As eviction moratoriums come to an end, and utility assistance up next to do so, Pawloski feels the center is a critical resource for the community.

“We’re getting ready to start bringing some people in,” he said. “It’s been difficult. The people hurting have grown exponentially.”

One of the challenges Pawloski has seen is people not having a place to be while they are in between circumstances, such as jobs and stable housing. Facilities like public libraries have been limited.

“The shut downs compounded the situation,” he said. “I constantly communicate with landlords to find places for people.”

The Ferry Street Resource Center is located in the historic Ferry Street School. The classroom is still preserved inside, with desks in rows. The center’s mission is assisting area residents. It does this through connecting people in need with resources, educational programs and activities. Its stated goal is “to bridge existing educational, cultural and societal gaps that exist within the community.”

According to Pawloski, the center has been trying to book appointment times for people seeking the assistance finding resources the center is known for. Doing that with a limited staff has been a challenge.

“We don’t always see the impact right away,” he said. “We do what we can, the best way we can.”

The center partners with the city of Niles and community organizations to help connect those in need to resources. Pawloski himself teaches a class called “Jobs for Life,” where he educates attendees on acquiring and keeping employment, especially after circumstances that make it difficult obtain a job in the first place. It is a class he believes in to get results for the attendees, but he has not been able to teach it lately. The class is usually hosted at the Niles District Library, and as gatherings have been limited, so too has the class lately.

Pawloski said the he hoped the center will soon see funding from the CARES Act, but it has not hit the community level yet.

For now, he is still working to use the two community computers in the office to get residents to fill out the 2020 Census to accurately represent the area and connect them to the resources to help them obtain employment and housing. Even connecting residents in need with the technology to print off identification and fax it along with forms to the unemployment office has been a task the center assists with. Pawloski even receives mail at the center for people who might not have a permanent address.

“It’s a multi-faceted challenge,” he said. “We are trying to bring any resources, and want to have a place at the table to represent people. We wish [the virus] would go away.”

Buchanan man sentenced to prison for possession of meth, firearm