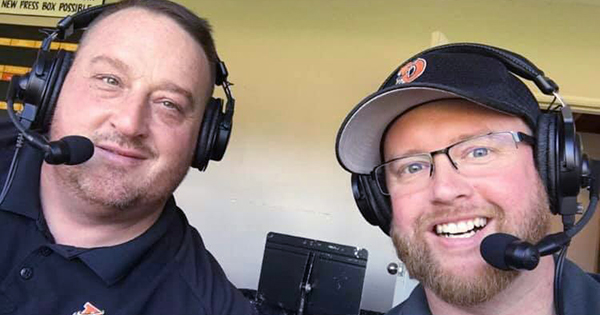 DOWAGIAC — When the Chieftain Sports Network kicks off its 2020-21 season, a pair of familiar voices will be calling Chieftain football games.

Sports was then canceled for the spring season.

“Streaming is the present and future of how we listen to sports,” Jason, who has served as the main play-by-play voice of the MHSAA for 30 years, said. “We have nearly 7,000 people who have tuned in to hear the Chieftains, so we’re excited to have the football team’s familiar voices bringing the games to a much larger audience this fall.”

Bakeman and Williamson are both alums of Dowagiac Union High School. Bakeman, who is also a Dowagiac City Council member, graduated in 1988. He played on the 1986 Class BB regional championship football team that went 11-1. His senior year, the Chieftains were 8-1.

Bakeman is a graduate of the Lansing Barber College (1999). He is licensed in both Michigan and Indiana. Bakeman opened Bakeman Barbers “The King of Cuts” in 2005.

Bakeman, who is married with three children, is a founding member of the Greater Dowagiac Youth Professionals. He volunteers by coaching youth sports and serves on a variety of area boards.

He was a member of the Mid-States Football League and finished in the Federal Football League, where he participated in two pro scout combines and in the MSFL championship game.

Williamson, who is married with three children and three grandchildren, is the general manager at Big C Lumber in Shipshewana, Indiana.

DOWAGIAC — The American Red Cross has announced several opportunities for southwest Michigan residents to give blood in the coming... read more