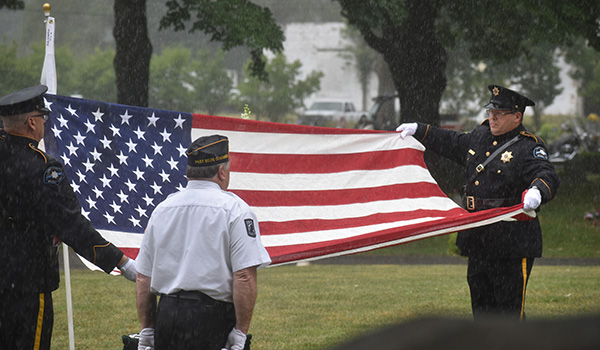 BUCHANAN — Attendees lined the paths at the Oak Ridge Cemetery on Friday. Rain poured as bugle players blew “Taps,” as an American flag was unfurled, folded and presented to the family of Walter Lyle “Bud” Baker by a representative of the U.S. Army.

The cemetery was filled with mourners, veterans, motorcyclists, police officers and community members coming to pay their respects to Baker, who passed on March 30. The Military Rights ceremony was done in honor, posthumously, for the Vietnam veteran. Baker was presented with the Distinguished Service Cross.

The memorial Baker was hosted Friday at Oak Ridge Cemetery. There were many in attendance for the military honors and service celebrating the life and service of Baker.

The ceremony began following an arrival procession, including Baker’s cremains.

An introduction was given by Lee Scherwitz, and memories were given by Reverend Lonnie Truelove Sr., Pastor Shannan Truelove and former senator John Proos.

Congressman Fred Upton, of Michigan’s Sixth District, was in attendance to read and present the Distinguished Service Cross Citation to Baker.

“The president of the United States takes pleasure in presenting the Distinguished Service Cross to Walter. L. Baker, Specialist Fourth Class, U.S. Army, for extraordinary heroism in connection with military operations involving conflict with an armed hostile force in the Republic of Vietnam, while serving the Company A, 3d Battalion, 7th Infantry, 199th Infantry Brigade,” Upton said, reading the citation.

The citation read continued on to say Baker had distinguished himself through “exceptionally valorous actions” on April 24, 1968, while a rifleman with his company 12-miles northeast of Bien Hoa. The company encountered enemy forces, described as an “an estimated battalion of well-entrenched North Vietnamese Regulars.”

“As he advanced toward a second bunker, he was wounded in the leg and back by an enemy sniper,” the citation said. “As he lay on the battlefield, he saw communist troops setting up. a machine gun on a trail facing his platoon. Ignoring his painful wounds, he assaulted the machine gun position, eliminating it with rifle fire and grenades.”

Baker received seven additional wounds during this encounter, but captured the enemy’s position. He called his comrades to follow, and showed them the other “hostile emplacements.”

Only then did Baker allow himself to be evacuated.

“Specialist Four Baker’s extraordinary heroism and devotion to duty were in keeping with the highest traditions of military service and reflect great credit upon himself, his unit and the United States Army,” the citation said.

“Better yet, he rubbed off on all of us,” Upton said.

Medal of Honor recipient Jim McCloughan was in attendance, slated to sing “God Bless the USA,” by Lee Greenwood.

“What an honor it is to be here,” McCloughan said. “[Baker] was about my height, maybe even a little bit shorter. I never knew there was anyone shorter than me, but he was a giant of a man.”

He chose to sing the song by Greenwood, as it was one of Baker’s favorites.

American Legion Posts 51 and 49 made up the Military Rights team. Post 51 conducted the 21-gun salute, before the ceremony’s American flag was officially presented to Baker’s family.
Rain poured on the attendees as the sounds of two bugle players rose the mournful “Taps” through the cemetery, followed by “Amazing Grace.”

LA GRANGE TOWNSHIP — A Cassopolis woman was injured in a hit and run accident Monday morning, according to the... read more