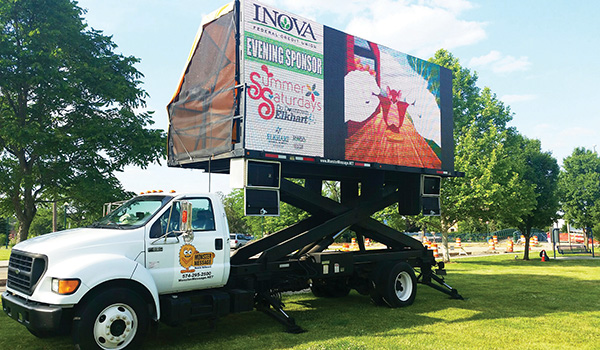 EDWARDSBURG — So far this year, people have been limited in their entertainment choices due to the COVID-19 pandemic.

The Edwardsburg Public Schools Foundation will change all that Sunday night as it hosts a drive-in movie in the visitor’s parking lot at Edwardsburg High School.

For $2 per carload, families can watch “The Sandlot” on two mobile high-definition screens. The parking lot opens at 7:30 p.m., with the movie scheduled to begin at 8 p.m.

The foundation is showing the movie in an effort to say “thank you” to the community of Edwardsburg, or at least the first 150 vehicles that come to the school.

Foundation member Shane Frost works closely with the company that will be providing the trucks that carry the screens, Monster Message Mobile Billboard out of Elkhart, Indiana. Frost works for Momentum Marketing Consultants in Elkhart.

“We noticed there were organizations down here that were having drive-in movies, so we thought, let’s try to bring that to Edwardsburg and still keep socially distanced,” Frost said. “Cars will be parked every other spot and can sit in their cars or have a couple of lawn chairs on the passenger side of their vehicles and listen to the movie that is being transmitted from the truck over an FM signal.”

The movie will be shown rain or shine.

Edwardsburg used the same company for its parking lot graduation a few weeks back.

“It is the same company, but we decided to have two screens up there,” Frost said. “If you look on the Edwardsburg Schools Foundation’s Facebook page, there is a map. The cars will be facing east, and the trucks will be on the east side of the parking lot so that every car will be within three or four rows of a screen.”

While organizers said the event is not a fundraiser, all proceeds will go toward the Edwardsburg Public Schools Foundation

“I am not doing it for advertising,” he said. “We have a good opportunity to do something good for the community where people can get together and not be on top of each other. We can bring some families together. The movie will start at 8 p.m. and be over by about 9:40 p.m., so it is not too late.”

This event was put together in just four weeks. The reason for charging $2 per carload is to make sure people want to be at the event and will stay for the entire movie, organizers said.

People are encouraged to bring their own popcorn and beverages. Water will be sold for $1 to make sure everyone remains hydrated.