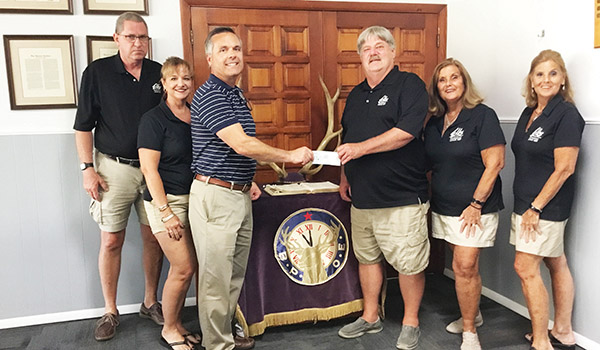 DOWAGIAC — The Dowagiac Elks Lodge is doing its best to live up to the saying “Elks care, Elks share.”

Exalted Ruler David Scott presented the check to SFO President David Hannapel during a special ceremony on Tuesday, July 7. The donation will be used to fund SFO’s Food Backpack Program, which helps provide weekend meals for students in need at Dowagiac’s four elementary schools as well as Dowagiac Middle School.

“Our Elks are very much about giving back to the community,” said Elks Inner Guard Susie Gendron. “We have a saying, ‘Elks care, Elks share.’ When the community supports us, we’re able to support the community in return.”

The Backpack Program serves 180 kids per week and consists of two breakfast, lunch, dinner meals per backpack. The four elementary schools and the middle school receive 35 backpacks each, with staff from each school deciding which students are most in need.

“It was a pleasure to help,” Gendron said. “It was a drop in the bucket considering what they do for these kids. We as the public need to do all that we can to support this program.”

In light of the COVID-19 pandemic, the Elks National Foundation encouraged lodges to focus on people and programs in need. That focus led to Gendron reaching out to SFO, which had an existing relationship with the lodge.

Several Dowagiac Elks members work with SFO, including Lodge Chaplain LuAnn Scott, who is both a board member and a co-chair for the Backpack Program. She said the money received from the lodge will be used to fund the program’s efforts at Kincheloe Elementary.

“I’ve been working for SFO for seven years,” Scott said. “It’s been a rewarding experience. We have a lot of community help and it takes a lot of people to do this.”

Scott said she appreciates the support SFO has received from both the Elks and the Dowagiac community as a whole.

“It’s amazing,” she said. “The more support we get, the better our program works. The Elks members were able to hear quotes from the kids in our program, which was an eye-opener for them. Our members can feel proud that they’re helping these families.”