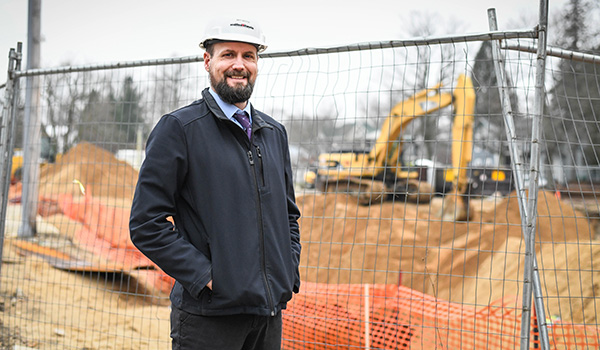 After breaking ground on the site in October 2019, construction was halted in March due to Gov. Gretchen Whitmer’s executive order shutting down construction. The project continued after Whitmer lifted the shutdown order on May 7. Since then, Library Director Matt Weston said construction has continued at a steady pace.

So far, the building’s walls have been placed, along with flooring, plumbing and some of the inside walls. The main entrance will be relocated to the expanded wing, facing Main Street. The new entrance will lead to the first floor, which will feature an expanded main public space, an adult nonfiction area, a quiet reading room, and a meeting room.

Weston expects the expansion to be completed in October.

“It was originally supposed to be completed in August, so we’re a couple of months behind,” he said. “They have made up for a week’s worth of work, so if things go well we could be opening the expanded portion in early October.”

Once construction on the expansion is complete, library operations will move to the expanded wing while the original portion of the library is renovated. The original front entrance will be made into a secondary entrance that will lead to the second floor, which will house both the children and teen sections.

A performance stage will be also built on the property at the intersection Main and New York streets, which will be used for both city and library programs. Weston is hopeful that the renovations to the original building will be completed in late February 2021.

“Visitors can expect expanded book collections and more computers,” Weston said. “Both the teen and children areas will have separate computer stations. There will be more space for community activities as well. It’s been pretty exciting picking out the furniture and technology.”

The expansion and renovation is a result of a $7.4 million bond over 20 years that was passed in November 2018 to renovate and expand the library. With the last update to the library’s structure completed in 1973, Weston hopes that the new-and-improved library will meet the demands of the community.

“I hope to see more and more people come to use our services,” he said. “We want this to be a convenient place to visit when you come into town,  a place with a lot of items of interest and programs people will inquire about. People utilize the library for different reasons, and we want to be able to meet those needs.”