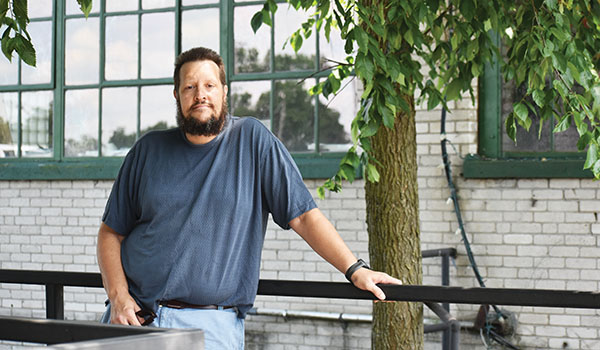 BUCHANAN — To resident Dave Van Dyke, the sight of downtown Buchanan is home.

The shadows of war heroes hover over the streets, as their images are proudly displayed on banners hanging from lampposts lining the sidewalks. Smiling faces walk in and out of the storefronts, while a peer into some of the windows on Front Street would find messages of solidarity, equality and justice.

While the sight may be home to Van Dyke, he believes it is unique to his hometown, which is why he decided to nominate Buchanan for recognition in a nationwide contest.

“I really do think it can be one of the ‘Nicest Places in America,’” Van Dyke said.

Recently, Buchanan was named “The Nicest Place in Michigan” as a finalist in Reader’s Digest’s “Nicest Places in America” 2020 contest. The contest, now in its fourth year, is an effort on behalf of Reader’s Digest to find the nicest places in each state. According to its website, a nicest place is “a place where the people believe in kindness, civility and each other, neighbors help each other out, and strangers are welcomed as friends.”

The winners of the contest will be announced in the coming weeks.

Van Dyke was the one to nominate Buchanan for the award. He said he was inspired by the banners of veterans posted around town by the community and the American Legion following the cancellation of the city’s Memorial Day parade due to COVID-19. He said he was further inspired by a peaceful protest hosted in support of the Black Lives Matter movement, following the death of George Floyd, an African American man killed by a white police officer in late May.

The article about Buchanan’s nomination published on Reader’s Digest’s website heavily features both the banners and the protest.

“I was very moved by those things, so I wrote in,” Van Dyke said. “I wasn’t expecting it at all, but one day I got a call from a guy in Brooklyn who said, ‘can you tell me more about this city?’ That’s when it happened. I was just really thrilled. We needed some good news around here very badly.”

Van Dyke was not the only one excited by the news.

“I’m very excited,” added Mayor Patricia Moore. “This is the kind of town where people want to raise their families. I think it is a wonderful place.”

In his nomination, Van Dyke wrote: “We have Republicans and Democrats here in our swing state. We have Christians and Jews, liberals and conservatives. And you know what? It doesn’t matter to us one bit where you came from or what you believe: You are welcome here.”

Sitting inside of Lehman’s in downtown Buchanan more than a month after he wrote that nomination, Van Dyke said he meant every word.

He said his family has felt at home from the moment he arrived in town 17 years ago. When his son, Jacob, was 4 years old, he suffered brain damage after experiencing seizures. He said the Buchanan community surrounded his family and allowed Jacob to ride in a fire truck with Santa Claus during the city’s annual Christmas parade.

“The community just really came together to help us,” Van Dyke said. “It’s always just seemed like we belonged here, and I know that’s true for other people here, too.”

Moore said the proof that Buchanan is worthy of being named “The Nicest Place in Michigan” is in that people like Van Dyke feel called to nominate for such a distinction. She said it is people like Van Dyke who volunteer their time to Buchanan to bring music to the public or create a dog park or feed the pond’s ducks that make the city special.

“People here are very passionate about helping other people,” she said. “We have an attitude here in town where people find something they are passionate about — whether it’s theater, music, governance, children’s issues or whatever it is — and you can find someone likeminded, and you can actually accomplish something here. As a city commissioner, we know that when someone comes forward with an idea, we know to get out of their way to let them accomplish it. We then help them out as best we can.”

Now that Buchanan’s name is on the map of Reader’s Digest’s “Nicest Places in America” list, he hopes people will be drawn to the area and know that it is one of a kind.

“Our motto is ‘life is better here,’” Van Dyke said. “That really is true. We are very inclusive here. It’s a nice place to live. It, to me, is one of the nicest places in America.”