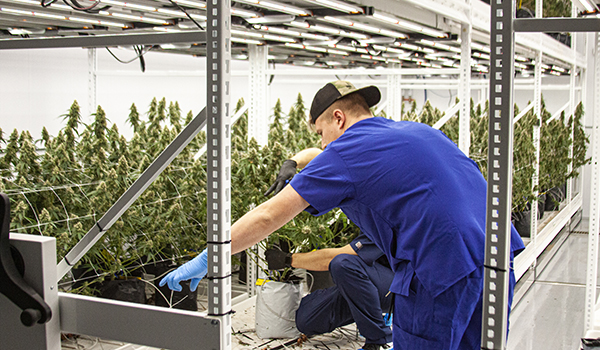 BUCHANAN — Cultivating a destination and experience is the next step for local marijuana grow operation and processing lab Redbud Roots.

The company’s leadership is looking to offer more than just adult-use and medical marijuana at a new facility coming to 455 Post Road. The company is in the process of expanding its current operations. Currently, Redbud Roots operates three facilities in Buchanan, and is expanding to include a fourth. The fourth will include a retail location with viewing areas of the grow and processing operations, according to Alex Leonowicz, chief operating officer and general counsel for Redbud Roots, Inc.

The business is creating a brand new way to buy bud in Buchanan, and staff are growing it right where the processing facilities were planted.

The new retail location will include a unique way for both medical use patients and adult-use customers to witness the growing and processing of the plants from new growth to final product.

Leonowicz described the experience as akin to what one might find in Michigan’s wine country.

“If you’ve ever been on a wine tasting, you can see the grapes, go through how everything is made and see the final product in its form,” Leonowicz said. “I think in terms of bringing folks into the area, it will serve as a destination of sorts.”

The location will give visitors a better idea of how Redbud Roots turns its plants into the products its current patients and future adult-use clients use.

The new facility with the feature to look in on the cultivation and processing of the marijuana plants into products Redbud Roots will sell directly in shop is projected to be built in the first quarter of 2021, according to Leonowicz.

“We would do it sooner, but given our current plate and what we’ve got on it, it’s a lot to work on, so that’s the only reason it’s going to be pushed a little further,” he said.

He hopes that the viewing areas of the new establishment will bring in more people to the Buchanan community.

“It captures that higher-end feel of what we’re trying to do,” Leonowicz said. “I think it will be unique, and hopefully grab some people and bring them into the area to experience this with us.”

When Redbud Roots initially opened in the Buchanan community, Leonowicz said the city was reluctant to put marijuana businesses downtown. He said the sentiment is nothing new when pot businesses begin to bud in communities.

“[The city] kind of learns to understand what these facilities look like, and see the impact that they can have on the economy in the local area,” Leonowicz said. “I think most people think everyone is going to be smoking pot, sitting outside. It’s not. It’s the opposite.”

Retrofitting older buildings to be utilized, cameras being installed can provide extra security in the area, and the increased traffic flow of consumers to the area are just a few of the positives he lists off to having destinations like Redbud Roots in a community.

“It’s a lot of education and understanding,” he said.

LANSING — The Michigan Department of Health and Human Services is making it easier than ever for residents to find... read more