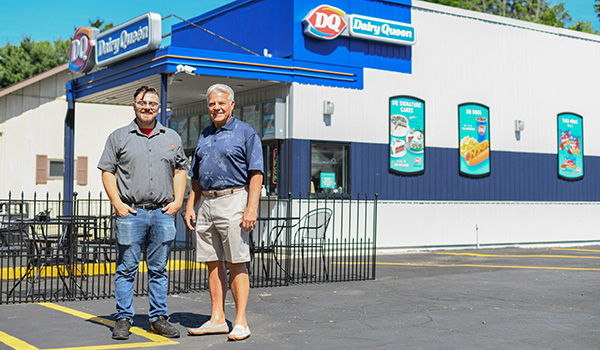 NILES — The sunshine and warm weather are here for the summer. Days like that pair well with an ice cream cone or a hot fudge sundae to celebrate the warmer months in southwest Michigan.

A community favorite, Dairy Queen at 1445 Oak St. has reopened under new ownership, just in time for summer days to melt into treat-filled afternoons. The Niles shop is now owned by father-son duo, Dominick and Bill Russo.

When Dominick was younger, his parents became the owners of two Dairy Queen franchises in northern Indiana.

“My wife and I, 22 years ago, were looking for a business,” said Bill, Dominick’s father. “The [Dairy Queen] in Mishawaka came up. We looked at it and saw that it was appealing and bought it.”

When Dominick wanted to come aboard as an owner and take over the business, Bill supported it.

“I worked [at Dairy Queen] in high school,” Dominick said. “I worked on eating all the candy toppings there when I was a little, little kid.”

The location in Niles became available, and the Russos decided it was the right next step.

“It’s a slightly different market. We have more of a neighborhood feeling here,” Dominick said. “I feel like we get guests bringing their dogs in on leashes, walking in from down the street. We get a lot of foot traffic, which is different from our other two stores.”

Both Dominick and Bill said their other stores offer “pup cup” treats to customers, but that the Niles store had much more of a community feeling when its own neighbors started coming up to the window with their pets.

The foot traffic was welcome while the family was doing renovations on the store. Acquiring the location in February, they used the extra time during COVID-19 mandated shutdowns to their advantage to ensure the store was cleaned up and renovated just the way they wanted it to be.

“We were excited for the potential in it,” Dominick said. “I know every person who walked past here while we were working on it was excited to get it up and running. Everybody loves Dairy Queen in this area.”

Dominick left for college after high school. Attending film school at Full Sail University in Florida, he came back home and became a manager in the stores his parents owned.

“We have two Grill and Chills, which are the standard Dairy Queens with the full food menu,” Dominick said. “This was the one different one we were going to have to get used to. There’s a little bit of a variety in what we are doing with this store versus what we do here to manage it and make sure everything runs smoothly.”

With the experience of his parents helping him along the way, and seven years of managerial experience in their other stores, Dominick is excited to be a part of opening one of the locations as an owner himself.

“We’re excited to get it back to what the community wants it to be,” Dominick said.

DOWAGIAC — With the help of community donors, one local organization will once again light up the sky this Fourth... read more