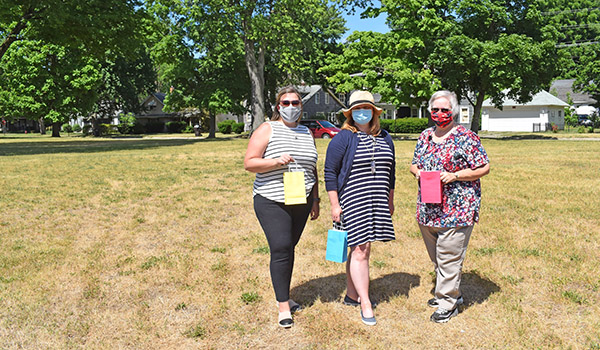 DOWAGIAC — People driving through Dowagiac Wednesday afternoon had a chance to learn about safe sex and the importance of testing for sexually transmitted diseases.

National HIV Testing Day is observed each year on June 27. According to the health department, it is a day to encourage people to get tested for HIV, know their status, and get linked to care and treatment. Typically, the Van Buren/Cass District Health Department celebrates the day by hosting free HIV screenings. However, due to concerns surrounding the COVID-19 pandemic, staff opted to host the curbside condom event instead.

“Things look a little different this year,” said Danielle Persky, deputy health officer and health promotions director. “We thought we would try this out.”

As of 2018, Cass County reported an HIV rate of 50 to 99 individuals per 100,000 residents, according to a report released by the Michigan Department of Health and Human Services. Statewide, Michigan had a total of 16,306 individuals living with HIV as of 2018.

According to Persky and Susan Oosterwal, STD and HIV supervisor for the health department, testing is important so that residents can know if they are spreading a disease to another person.

“If you know, you can get treated,” Persky said.

“You should know your own status,” Oosterwal added. “Then, you can take advantage of all of the resources available to you.”

Despite the stigma surrounding HIV and STDs, Oosterwal said Cass and Van Buren county residents could help normalize the idea for testing by talking with their partners and even getting tested together.

“The reality is that people have sex,” Persky added. “HIV, STDs don’t discriminate. Anyone can contract an STD, so I think it is important to reiterate that message that everyone should use testing and protection because everyone is susceptible. If you are having sex, especially with more than one partner, the risk is there.”

Though the curbside event was Wednesday only, Persky said residents could visit the health department at any time to receive condoms or learn more about STD testing.

EDWARDSBURG — At a special meeting June 19, the Ontwa Township Board of Trustees approved its COVID preparedness plan, which... read more