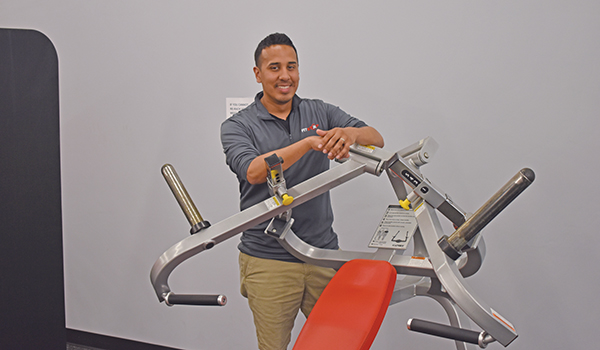 NILES — Wednesday morning, FitStop24 in Niles was mostly empty save for a handful of individuals lifting free weights or taking a run on a treadmill, each keeping a careful 6-foot distance from one another.

Behind the check-in counter, owner Gary Marshall waved to people as they walked in and out of the gym.

That day, Marshall received a $250 fine for opening his gym. However, he said it was worth it to provide for the physical and mental health needs of southwest Michigan residents.

“If I can help one family, one person, who is suffering from mental health issues or depression by being open, then it’s worth it,” he said. “You can’t put a price on life.”

Last week, Marshall, owner of the Niles and Dowagiac FitStop24 gyms, reopened his businesses despite a continuing state order that mandated fitness centers in the southwest Michigan region close due to the COVID-19 pandemic. Since then, he has received a $250 fine for each day he has remained operational.

Though gyms have been allowed to reopen in northern Michigan, no date has yet been set for when fitness centers can open in the rest of the state.

Despite the mounting fines, Marshall said he believes reopening against state orders was the right decision for his family and the community’s health.

Since the COVID-19 shutdowns, Marshall said he heard from many of his members and people in the broader community that their mental health has been negatively affected. He believes that gyms and physical fitness are essential to combatting depression and that closing gyms in the wake of the COVID-19 virus has caused more harm than good.

“I’ve had multiple people call and say, ‘I had no idea what I was feeling was depression’ or that they’ve had suicidal thoughts,” Marshall said. “I just want our community to be better. When people feel better about themselves, it’s just better for them and everyone else.”

He said those calls were a reminder to him how many people seek out fitness as an outlet for mental health. Because of this, he said he plans to stay open despite the fines.

“I wasn’t smart enough to be a doctor, so this was the next best way to help people,” he said with a laugh. “I’ve never been so clear about what I want to do in my life.”

Though reopening has resulted in some negative feedback, Marshall said he had received broad community support for his decision. Since reopening, he has implemented additional stringent sanitization measures and a sign-in system and has moved to a donation-based system for people who want to use the gym. He said the donation system has allowed him to pay his fines and his bills on the gym. He even said he has had some people pay one of his day’s penalties for him.

“Things have been great. The community has been great,” he said. “I don’t regret my decision at all.”

Now Marshall waits for the announcement of when he will be allowed to reopen his gym legally. Though he is not sure when to expect that announcement, he hopes it is soon. Until then, he said he would keep his doors open and keep accepting fines.

“I’m ready,” he said of reopening. “People are dealing with so much stress right now, and I want to provide an outlet for them.”

SOUTHWEST MICHIGAN — One of Brandon Truitt’s favorite facts about his Edwardsburg barbershop is that he can say it is... read more