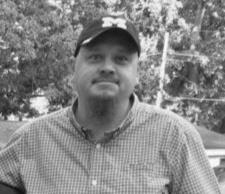 He was born on June 16, 1971, in Kalamazoo, to the late Barry A. and Carol J. (VanderMolen) Yeomans. After his father, Barry, passed away, Jeffery was 6 years old when adopted by his aunt and uncle, John and Shirley Breedveld. During his teenage years, he went to live with his step mom, Kay (David) Howell, who later adopted him.

Jeff is a 1990 graduate of Brandywine High School. He served his country proudly, receiving an honorable discharge from the U.S. Air Force. He has worked as a cook for many years at The Tavern in Niles. Jeff enjoyed fishing, watching movies and football; to say he was a Michigan fan was an understatement. He also looked forward to time spent with family including trips to Pizza Hut with nieces and nephews.

He is preceded in death by Barry and Carol Yeomans, as well as David and Kay Howell

Jeff is survived by a sister, Stefanie (James) Eskut, of Lyons, Kansas; a brother, Jason (Darla) Yeomans, of Niles; nieces and nephews, Jeremy Eskut, Kaitlin (Patrick) Sullivan and Brittanie (Daniel) Pando, all of Lyons, Kansas, Adam, Nick Piszker and Karra Yeomans of Niles and Williston, N.D.; as well as many other aunts, uncles and cousins.

Funeral services will be held at Brown Funeral Home in Niles at 5 p.m. on Wednesday, June 10, 2020, with Pastor Gordie Fox officiating. A time of visitation will begin at 3 p.m. until time of service. Full Military Honors will be held at Fort Custer National Cemetery at a private ceremony.

An informal celebration of Jeff’s life will be held at a later date to be announced.

The family is requesting donations to honor Jeff be made to his funeral fund on brownfuneralhomeniles.com,

Memories of Jeff may be shared with the family at BrownFuneralHomeNiles.com.