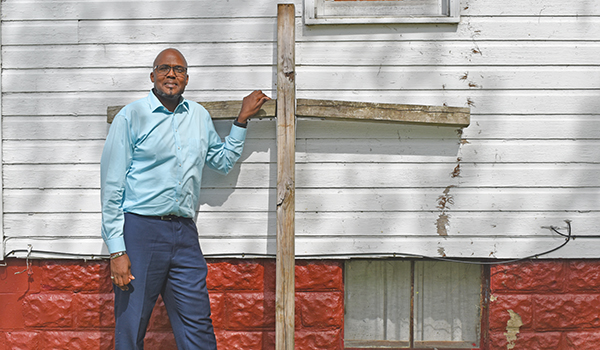 DOWAGIAC — When Dowagiac native and Benton Harbor resident Tonnie Blackamore opened the door of 201 Grand Blv. in April, he said he was “hit with memories.”

Though he had not stepped inside for the better part of a decade, everything inch of the building’s interior was familiar to him, from the golden glow of the windows to the red carpet to the wood grain of the pulpit where he used to stand every Sunday.

“I’ve experienced so many things here,” he said, glancing up toward a simple, glass chandelier above his head. “It felt like coming home.”

For 16 years, Blackamore preached inside the building as the pastor of New Harvest Missionary Baptist Church. Sunday, after seven years, he will preach again as the church’s pastor, marking New Harvest’s return to the Dowagiac community. To comply with COVID-19 social distancing mandates, the 11 a.m. Sunday service will be hosted outside, with Blackamore encouraging Dowagiac residents to bring chairs to the lawn or to partake from their vehicles.

“With not just coronavirus shutting everything down, but political unrest and all different types of protests going on, now would be the time to come back,” Blackamore said, sitting comfortably in a pew. “I’m following God’s lead.”

Blackamore founded New Harvest Missionary Baptist Church in 1997, at 201 Grand Blv., Dowagiac. When the church moved to a new location on Miller Street, the membership dwindled, and the church disbanded.

Blackamore said that after the church closed, he was left with a “deep wound” that needed to heal. He decided he did not want to pastor again and left for Benton Harbor, where he said God allowed his wound to “scar over and heal.”

Now, seven years later, Blackamore is bringing New Harvest Missionary Baptist Church back, saying God called him to heal the community just as his wounds had been healed.

“God just put it on my heart,” he said. “I think in Dowagiac right now, the physical, what you see, is a result of the spiritual. We have to get the spirit going to have a physical change.”

According to Alisa Jefferson, who grew up across the street from Blackamore, New Harvest’s closing nearly a decade ago not only left a wound in its pastor but also its congregation and the community.

“I left, and it was just kind of covered over. It hadn’t healed,” she said. “It was time to come home. We have got to get the spirit here, not just for scars. We have to heal emotionally. When we bring the spirit back here, we will heal the hurt.”

Once Blackamore was called to reestablish New Harvest, he and Jefferson started making phone calls and alerting the community. Jefferson said people were excited and ready for the church to return to its community. Blackamore said he has already received an overwhelmingly positive response to his announcement of Sunday’s return service and is expecting guests from as far as Detroit to attend.

“God is bigger than all of us,” he said.

Eventually, Blackamore hopes to see New Harvest Missionary Baptist grow to what it was at its peak, a thriving church with a membership of nearly 100 congregants. At one point, he recalled that the church had to angle the pews and bring folding chairs into the building to fit everyone for Sunday service.

NILES – The brutal 2010 murder of Carolyn and John Tarwacki inside their Carberry Road home will once again be... read more