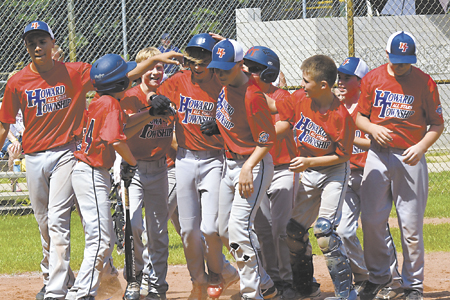 The Howard Township announced it will have an abbreviated season beginning June 22. (Leader file photo)

“We apologize for this decision, for the leaving the littles out, and hope you all bring them back next year,” said the board in a statement released on Facebook. “We will be providing full refunds for anyone that signed up for the rookie division. No email will be needed to confirm refund for this division.”

League registration is now open through June 10. League play is set to begin June 22 and will run for five weeks. Each division will play one evening a week, and teams will play doubleheaders on those nights.

A schedule is set to be released as soon as the number of players registered is confirmed.

Players who already registered for the season should contact their coaches to let them know they are still interested in playing.

Those who are not playing should contact the league on Facebook privately, or by email at btblinfo@gmail.com. Parents should include the player’s name in the email.

“Our board will truly miss seeing all the players smiles, excitement, hits, strikeouts, runs and home runs,” said the Brandywine board in a statement released on its Facebook fan page. “From the tee ballers doing somersaults going to home and playing in the dirt to, the older players sliding into home just because they can. The players’ achievements and progress made throughout the season to the disappointments of a strikeout, failed play or uncaught ball. The playoffs and championship games will truly be missed because of the nerve-racking excitement they provide.”

The league asks parents to be patient as the begin the process of refunding fees. Cash and checks payments will be mailed, while electronic payments will have refunds issued through PayPal, minus the PayPal fee.

CASSOPOLIS – An Elkhart man who said he was thankful to be arrested last fall has been sentenced to probation... read more