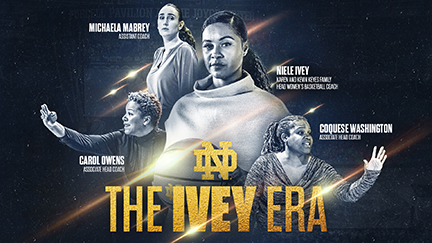 Washington donned the Irish uniform from 1989-93 and helped the program reach its first NCAA Tournament in 1992. Washington was later an assistant coach under Muffet McGraw from 1999-07 and tutored Ivey on the way to the program’s first national title in 2001.

“I am thrilled to announce that Coquese Washington has accepted the position of associate head coach,” Ivey stated. “It’s an absolute blessing to welcome Coquese back home to Notre Dame. Her experience as a former player and alum, WNBA champion and former head coach, plus her national championship coaching pedigree, provides me with incredible knowledge and wisdom. I am so excited to have her join my staff as we build this new era of Notre Dame women’s basketball.

“I am also thrilled to retain Carol Owens and Michaela Mabrey. Carol has uniquely been a part of all nine of the program’s Final Four appearances and brings incredible leadership to the staff. Michaela’s energy, passion and winning mentality speaks volumes. I’m excited to have my staff in place and can’t wait to see what we can accomplish together.”

Washington arrives to South Bend after a one-year stint as an associate head coach with the Oklahoma Sooners. Prior, she made a name for herself as the head coach at Penn State from 2007-19, amassing a 209-169 record and guiding the Lady Lions to four NCAA Tournament appearances and three Big Ten titles. Washington was the first female African-American head coach in Penn State history.

“Notre Dame has always held a special place in my heart,” Washington stated. “So much of who I am can be traced back to my time at Notre Dame both as a student and as a young professional. Being a part of our women’s basketball staff again is truly energizing. I would only leave a program like Oklahoma for one reason – to return home.”

From 2012-14, the Lady Lions claimed three-straight Big Ten regular-season titles (outright wins for the first two), making them one of four conference history programs to win three or more regular-season crowns in a row.

“It’s exciting to imagine the levels of success our program will experience under coach Ivey’s leadership,” Washington added. “Working with dedicated folks like Carol Owens, Michaela Mabrey and the rest of the staff, our program will continue to have a dynamic impact on our University, our student-athletes and our community in a variety of ways.”

In her original stint on the sidelines at Notre Dame, Washington helped the Fighting Irish to four Sweet 16 appearances in eight seasons, including the famous 2001 national title. Washington was instrumental in helping the Irish secure eight consecutive Top-25 recruiting classes, a feat only accomplished by two other programs in the country at the time (Connecticut and Tennessee). Additionally, Washinton coached five different Irish All-Americans, including Ivey and Megan Duffy (current Marquette head coach), and worked closely with Alicia Ratay (Notre Dame record holder).

Off the court, the newly-minted Irish coach was just as impressive, as Washington earned her degree in just three years. Later, she earned her Juris Doctorate from Notre Dame in 1997, earning ‘Double-Domer’ status.

Washington played six seasons in the WNBA and is one of five Irish to have won a WNBA title, achieving the feat with the Houston Comets in 2000. Washington was also a key figure in helping create the WNBA Players Association (WNBPA), serving as the founding president of the WNBPA from 1999 until 2001. She served as the executive vice president of the WNBPA from 2001 until her retirement in 2003.

In addition, Washington led negotiations for the association’s first collective bargaining agreement as the association’s president. As the executive vice president, she was a mainstay in the negotiations for the league’s second collective bargaining agreement, which brought about the first free agency system in women’s professional sports.

Washington’s service to the game has gone beyond just coaching. She served on the WBCA Board of Directors and led a committee tasked to grow the women’s basketball game. She won a gold medal with Team USA at the 2013 World University Games and served on the USA Basketball Women’s Junior National Committee from 2009-12. She was a member of the Kay Yow Cancer Fund Board of Directors from 2012-15 and also served five years on the NCAA Women’s Basketball Issues Committee.