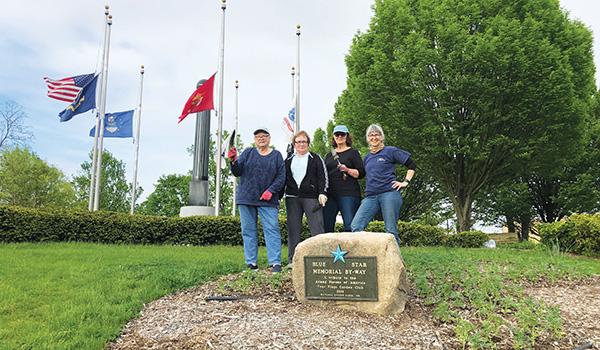 NILES — Golden yellow marigolds were planted just before Memorial Day by the Four Flags Garden Club in the Yellow Ribbon Garden in Riverfront Park. The club works every year to ensure the garden is tended to prior to the holiday, in remembrance of military members who have served and sacrificed for the nation.

“We started [the garden] in response to the Afghanistan war,” said Four Flags Garden Club vice president Elaine Metzger. “There was a big stirring of patriotism at that time, and there was a movement across the garden clubs to do Yellow Ribbon Gardens.”

The Four Flags Garden Club is a part of the National Garden Club, which was a large part of the motivation to plant the Yellow Ribbon Gardens. The Blue Star Memorial Marker came later to the same garden.

Making a colorful statement in the park, these two gardens are the Four Flags Garden Club’s biggest dedications to recognizing veterans and those who have served in the military.

“We just want to have a public demonstration of our support for them,” Metzger said.

The Four Flags Garden Club has had a presence in the Niles community since the 1960s. The club’s main site to tend to has been the gardens at the Niles Amtrak train depot.

The gardens at the depot have a historical significance to the area, that the club hopes is not forgotten.

“The gardens there were extremely noteworthy at the turn of the last century, when the Michigan Central Railroad used the station and the tracks at the time,” Metzger said. “It was the heyday, and the preparation for the World’s Fair in Chicago, in 1893.”

The Niles station was the last stop for many on their way from the east coast to Chicago.

There was a large greenhouse that grew flowers to be used in the dining cars, in the offices and to be given to the ladies who came through the Niles railroad station.

“The gardens were very impressive,” Metzger said “There were some very fancy ways that they used to do the gardens back then. Not only in Niles but at many other cities, they had the name of the city spelled out in flowers at the depot.”

According to Metzger, it is said that the founder of the gardens in Niles, John Gipner, helped put Niles on the map.

The Great Depression took its toll on the train depot, and the revival efforts began in the 1970s. According to Metzger, the climbing roses on the wrought iron fence, a weeping mulberry tree and lilies in the train depot’s gardens were originally planted by Gipner.

NILES – A Niles man is going back to prison after being sentenced Tuesday in Berrien County Trial Court. Timothy... read more