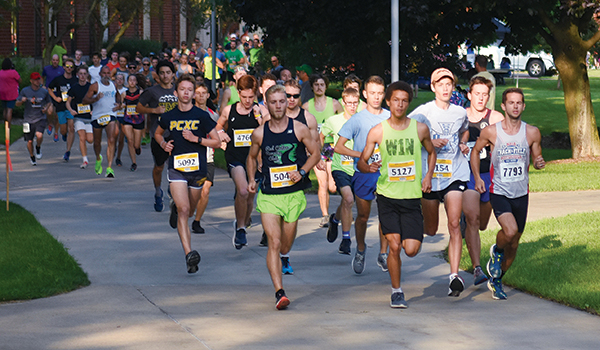 Steve’s Run will be a virtual run in 2020 due to the COVID-19 pandemic. (Leader file photo)

DOWAGIAC — Over its 46 years, the original Road and Trail Race sponsored by Southwestern Michigan College has gone through changes.

Among the changes have been the course, where the race starts and finishes, and even a name change. In 2020, it will undergo another change as it will become a virtual race due to the COVID-19 pandemic.

Steve’s Run is hosted annually in honor of Steve Briegel, the son of former SMC president David Briegel and his wife, Camille. All proceeds from the race are donated evenly between cancer research and the Steven Briegel Scholarship.

In recent years, after moving the start from downtown Dowagiac, Steve’s Run has started and finished in front of the David C. Briegel Building on the campus of SMC.

The 10K run takes competitors across a golf course, Riverside Cemetery in Dowagiac, on paved roads and along the college’s wooded trails. According to those who have run it, the course has a true cross country feel to it.

The 5K route for runners and walkers, also winds through the wood trails and on paved roads before finishing on the college campus.

While no official announcement has been sent out by SMC officials, the Steve’s Run Facebook fan pages now lists the event as Steve’s Run, Virtual 10K, 5K and Fun Run.

This story will be updated as soon as additional information becomes available.

NILES — Volleyball coach Jenny Nate may not be able to work with her club team or former players in... read more