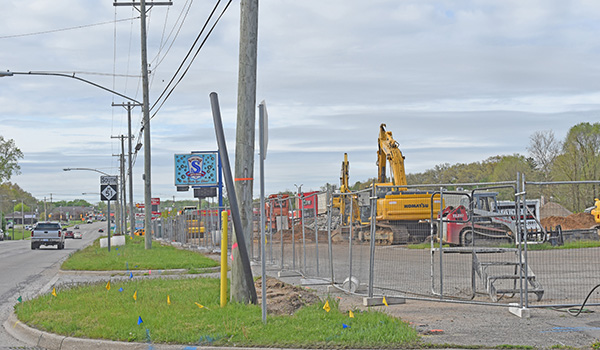 NILES — New business is beginning to bloom in Niles once again.

Businesses are now beginning to move forward with plans again as COVID-19 mandates have loosened to allow for construction. Without new businesses to approve through the heavy mandates, the city’s planning commission meetings were postponed until site plans began coming through the office again.

Vitale said that her office has been speaking with architects, so she anticipates scheduling a planning commission meeting during the month of June.

Though the planning commission’s meetings have been quiet, parts of town are now rumbling with activity. At 518 S. 11th St., the Schillings Auto Wash site has seen demolition work by construction crews. The site is fenced off, with heavy machinery and workers moving the demolition forward to make way for a new Drive and Shine business.

The initial estimate for the business to build was $6 million, according to Vitale. The site was approved in February for the new business.

“He hopes to actually be open before the end of this calendar year,” Vitale said of owner Haji Tehrani. Tehrani is the owner of the northern Indiana and southwestern Michigan area Drive and Shine businesses.

Drive and Shine is not the only business moving forward. Final approvals for the new Popeye’s Louisiana Kitchen at 306 S. 11th St. were made in March. Plans were put on hold due to the COVID-19 mandates.

Vitale said that there were other businesses in the Niles area looking to move forward with plans.

Vitale mentioned that MichiCann, a marijuana vendor, is preparing for its final approvals.

“They are a 500 plant grow, which is the smallest one you can have,” Vitale said. “They’re the smallest grow that was provisionally approved.”

She said once the owners have obtained approvals, the company may move quickly to open for business.

“They will be our next operation to get done and ready to go,” Vitale said.

Another processing plant, Native Michigan Remedies, will likely be at the next planning commission meeting for final approvals, as well.

The ReLEAF Center’s parent corporation, MJM, has begun looking into applying for a processing license, according to Vitale.

“They’re looking at a closed loop system for processing. Hopefully that will get them going,” she said.

Another grow operation, Anthos, is looking to work at the Simplicity Complex.

“We expect to see their site plans the first part of June for their operation,” Vitale said.

SOUTHWEST MICHIGAN — In the wake of the COVID-19 crisis, the United Way of Southwest Michigan is seeking volunteers for... read more