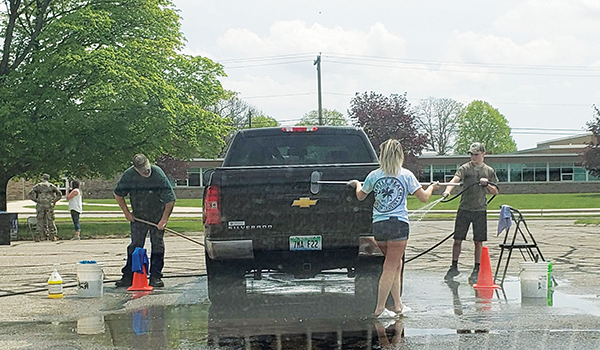 Dowagiac’s Charlie Company 3-126 Infantry Regiment hosted a two-day car wash fundraiser to raise money for care packages for local deployed soldiers in Afghanistan. The military unit is based out of Dowagiac.

“We were looking for ways to help bridge the gap financially for these households of children, mothers, fathers and husbands that are back here who have helped push soldiers forward,” said sergeant first class Taylor Phillips. “It’s very expensive to get care packages over to the soldiers. It’s one of those things that we were able to see the need.”

Charlie Company’s goal was to help provide financial support to pay for all the shipping and handling fees associated with the care packages.

This weekend, the company raised enough money to ship about 50 care packages.

“It doesn’t sound like much,” Phillips said. “I can assure you that for those guys that are in Afghanistan it means a lot. At least 50 soldiers will be touched by the community with anything from foot powder to snacks and games.”

Phillips said the care packages will include a multitude of items people use on a daily basis, ranging from meat sticks donated by Jake’s County Meats in Cassopolis to playing cards, board games, shaving equipment and “I was thinking about you” letters.

The Charlie Company was assisted at the car wash by auto care specialists Grant Phillips and Mathew Sanburg from Wimberley Auto Sales.

“Grant is my little brother, so it was kind of one of those things,” Phillips said. “He wanted to help the soldiers and help the troops. We talked about the logistics piece of it and he said, ‘We can come down and take care of everybody’s needs.’”

Phillips said the two-day car wash was well supported by an array of community members.

“I was born and raised in this town,” Phillips said. “To see the community step up in a time of need and take care of our fellow soldiers and fellow vets that we are pushing out of here was just phenomenal. Those guys are mechanics and farmers, teachers, police officers. They are just regular, blue-collar guys.”

Phillips said he was honored and proud to be a part of the community that showed up to give. Warrior’s Oath, a charity motorcycle group out of Niles, showed up to support the troops and donated car washes. Patty Booth, of Booth’s Flowers, also made an appearance, along with members from Ausra Equipment & Supply Co. Inc., families from the Dowagiac Wrestling Club and city council members.

Phillips said the company would be interested in hosting the car wash fundraiser on an annual basis.

“We were able to help half the company in just a two-day period,” Phillips said. “It was really something.”