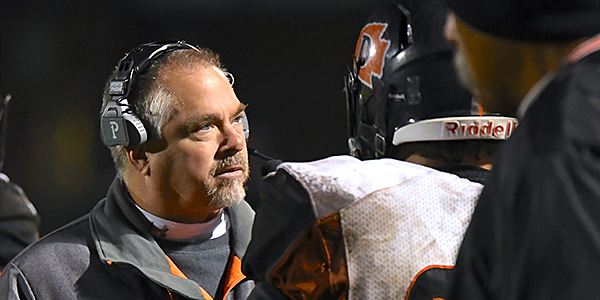 The MHSAA announced last Friday that its representative council approved a football committee recommendation extending the running clock rule when a team is leading by 50 or more points to both the first and second halves.

Currently, the 50-point rule only applied to the second half, as did the 35-point rule. 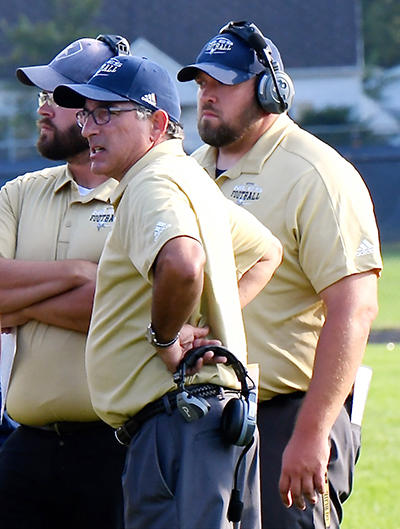 Niles coach Joe Sassano is also in favor of the changes announced by the MHSAA. (Leader file photo)

Beginning with the 2020 season, the clock will only stop for player time outs when a team is leading by 50 or more points in either half. The 35-point rule will continue as it has in the past.

In the second half, when a team is leading by 35 points, but less than 50 points, the clock will stop for penalty enforcement, scoring plays and called timeouts.

Dowagiac coach Randy Brooks, who will begin his second season leading the Chieftain football program, said he sees the benefit of the new rule.

“I like the idea of the running clock in the first half if a team is up by 50,” Brooks said. “When the differential is that great, I don’t believe either team gets a lot out of playing.”

“I think the running clock for a 50-point lead is good for the fact that players’ safety is very important in these types of games,” he said. “No coach wants to see his team get physically and emotionally beat up.”

Edwardsburg coach Kevin Bartz likes the rule, but wonders how often it will be used.

“I don’t think the first rule (50-point differential) for both halves will come into play very often,” Bartz said. “For the rare occasion where this does occur in the first half it is a good rule to implement.”

“The running clock rule doesn’t bother me, both teams in that situation more than likely would like to get out of that game as soon as possible,” Frey said. “The best rule change is that players have a fifth quarter. This would allow us to put JV players in the fourth quarter in those 35- to 50-point situations and give them a chance to develop and get acclimated to the Friday Night atmosphere.”

The MHSAA also announced that it approved a committee recommendation that would allow teams 15 summer dates for non-mandatory contact with an unlimited number of players. The rule would allow schools to use those 15 days as they see fit, but only seven of them can be used for 7-on-7 drills. Practices must be helmet only.

“As far as the 15 practices goes, I believe it will make it more uniform for everyone,” Brooks said. “I wish they would have included shoulder pads along with the helmets. There is so much more you can do technique-wise if they would have included shoulder pads. I believe with players learning better technique, the amount of injuries would be greatly reduced during the season.”

“Fifteen summer dates of non-mandatory contact with an unlimited number of players is going to help us prepare our players from the standpoint of developing techniques and fundamentals of the game,” he said. “The better the players are taught how to execute the proper fundamentals and techniques, the safer the game will become. This also gives us coaches the chance to enhance football IQ with our players. This is a big positive change for players and coaches and will have a positive impact on the game of football.”

Bartz will use the extra time wisely.

“In regards to the 15 summer dates of practice I think this allows teams a lot of opportunities to implement and install more offensive, and defensive schemes,” he said. ”Teams will be able to get a handful of 7-on-7 competitions and still be able to hold about two weeks of non-mandatory practices. Those 15 dates will use up the majority of the month of July for football preparation. At Edwardsburg we had been using about 10 days a summer for our football preparations. Six dates for 7-on-7 and four days of a camp for implementation and working on skills.  We have essentially gained five more days to work on skill development.”

Another new rule is that players may play up to five quarters per week.

According to the MHSAA, a player may only play four quarters in one day, per the current rule, but may now play an additional quarter on the sub-varsity level. The same is true for basketball, starting with the 2020-21 season.

“It will help in the development of players and increase the opportunity for players to gain experience,” Brooks said. “This is similar to what Indiana has been doing for years.”

BUCHANAN — With the cancellation of spring sports due to the COVID-19 outbreak, and the resulting “Stay Home, Stay Safe”... read more