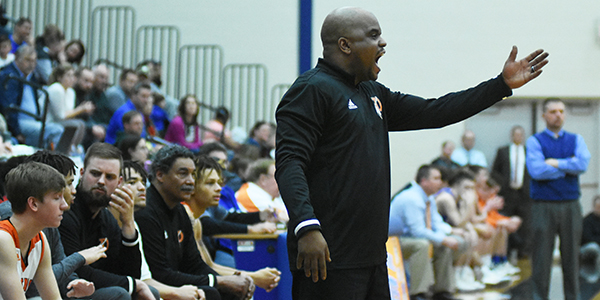 Dowagiac boys basketball coach Danum Hunt likes the changes to the seeding by the MHSAA, but wishes it would seed the entire field in the future. (Leader photo/SCOTT NOVAK)

DOWAGIAC — Last season, the Michigan High School Athletic Association used a formula to seed the top two teams in soccer and basketball for the district level of the state tournaments.

That seeding came under some criticism when the No. 1 and No. 2 seeds were forced to play an opening-round game, and in some stances, more games in the district tournament than unseeded teams.

Area coaches were happy to hear about the changes.

“Baby steps,” said Dowagiac boys basketball coach Danum Hunt, whose team reached the Division 2 district finals before the MHSAA suspended sports. “It is a good start, but I would like to see them seed all the teams, not just the top two.”

The 19 members of the council met remotely, just as it they did for the winter meeting to keep with social distancing requirements set forward by the state of Michigan.

The group looked at 32 committee proposals on a variety of topics, from eligibility to postseason to operational issues.

Restructuring the seeding for soccer and basketball topped the list of things the committee dealt with.

Last year, the state seeded the top two teams in both sports during the Michigan Power Rating computer formula. The formula used results based on regular-season results against MHSAA tournament-eligible teams and opponent’s strength of schedule.

After coaches and athletic directors voiced concerns over the fact that the top seeds were not any better off than they might have been with a blind draw, the basketball and soccer committees adopted a change to that seeding formula.

Beginning with the 2020-21 fall sports season, the top two seeds in those sports receive any existing byes. The No. 1 seed will take priority with the No. 2 seed getting the other bye, if available.

The remainder of the draw will continue to place teams on the bracket based on a randomly-selected order determined earlier in the season.

With the formula rewarding teams for their accomplishments, Hunt thinks seeding if the right way to go.

“The ones and twos, because of what they have done throughout the season deserve to be in that position,” he said. “I also believe that is gives you a true champion coming out of a district. There are upsets during tournament time, but if you can place the top two at the beginning, there is a good chance of getting a true champion. I embrace the change.”

Hunt also would like to see strength of schedule play a bigger factor in deciding the top seed.

In the case of Dowagiac, which had six losses, they came at the hands of teams ranked in the state — Benton Harbor, Otsego, Grand Rapids Union and Lakeshore. The Chieftains were seeded No. 2 for the district.

“That is the most important thing,” Hunt said about the strength of a schedule. “You could have a one seed that really has not played the perennial powerhouses that another does.”

Brandywine was a top seed for the Division 3 district and reached the championship game against Cassopolis before sports came to a halt.

Nathan Knapp, Brandywine’s veteran head coach, is not sure having a first-round bye is always a good thing.

Like Dowagiac, Brandywine upgraded its schedule to get itself ready for the postseason. That included a late date with the No. 1 team in Division 2, Benton Harbor.

Knapp feels teams should be rewarded from playing a tougher schedule.

“We were in the top five for strength of schedule for all the classes,” he said. “Of course, for that, we are already playing a bunch of ‘B’ schools in our conference, which I do not mind that, because It gets you ready for the tournament.”

Dowagiac was a No. 2 seed in last year’s boys district soccer draw, but the Chieftains and No. 1 seed South Haven both had to play in the opening round due to the fact that there were no byes.

That would be the case when there is a full field of eight teams.

Veteran Dowagiac soccer coach Mike Williams was concerned about how the teams were seeded after his team swept a pair of games against South Haven, but still ended up behind the Rams.

Williams agreed with Hunt that the committee has to start somewhere.

“It is going to take them a while,” he said. “They are going to look at the district and what seed where they. Did the No. 1 seed win? For us, one and two were in the finals, so it worked.”

The representative council looked at a variety of other topics, including some that dealt with the coronavirus outbreak.

Due to the canceling of sports, the MHSAA has decided to wait the 2020-21 pre-participation physical exam if the student-athlete has received on during the 2019-20 season. Athletes will still have to fill out the MHSAA annual sports health questionnaire.