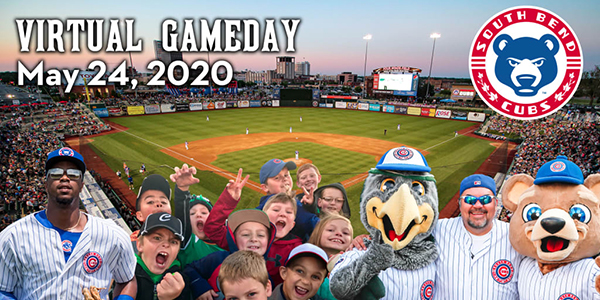 SOUTH BEND, Ind. — Off the success of a virtual opening on April 9, the South Bend Cubs will host another live and more interactive event on Sunday, May 24.

The broadcast begins at 6:30 p.m. on Facebook Live. The broadcast will feature the South Bend Cubs facing the Lansing Lugnuts from May 29, 2016.

“This will be even more interactive than Virtual Opening Day was,” said South Bend Cubs team President Joe Hart. “We know our fans miss coming to the ballpark and spending an evening together with friends and family. While we can’t open our gates just yet, we will bring the entire gameday experience to you.”

In addition to the game, fans will be able to participate in contests and games they are familiar with when coming to Four Winds Field. Throughout May, fans will be asked to submit photos, videos and nominations on social media for various activities including Subway Think Fast, Four Winds Casinos Slot-O-Fun, Zolman’s Best One Tire and Auto Care Fan Cam, and more. Plus, one fan will be invited to Four Winds Field to throw out the ceremonial first pitch.