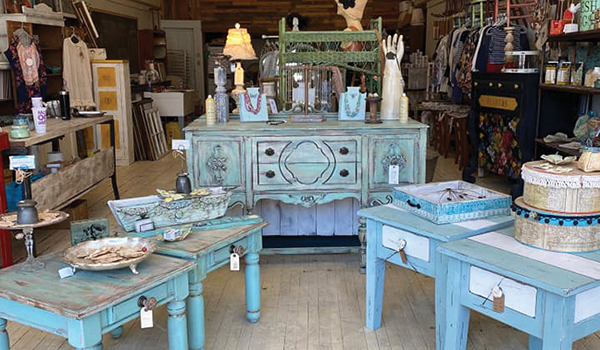 DOWAGIAC — Dawn Schlipp is no stranger to owning a storefront facing the streets of downtown Dowagiac.

In 2009, the Dowagiac native opened Oh My Old Made New Boutique just next door to her new location at 206 S. Front St., Dowagiac.

At that store, Schlipp provided customers with repurposed furniture, clothing and other boutique items. However, illness forced Schlipp to take a step back, and she then started selling merchandise at Rosy Tomorrows for three years.

Now, Schlipp is ready to get back in the game as she eagerly awaits to reopen not just one storefront, but two, after Michelle Stambaugh at Mud-Luscious reached out to Schlipp about combining forces at the Front Street location. As soon as COVID-19 restrictions are lifted, the storefront will open to the general public as Oh My, which will sell repurposed furniture, candles, clothing and purses.

“This isn’t new, I am just starting over,” Schlipp said.

However, there is one new component to Schlipp’s retail store — a second location in Sister Lakes. At the end of this winter, Schlipp committed to bringing her store to JD’s Marina at 50663 M-152, Dowagiac. The store in Sister Lakes will sell suits, furniture, jewelry and beach items such as sunscreen and will remain open during the summer months, while the downtown location will be open all year round, Monday through Saturday.

With two new locations already stocked, Schlipp finds herself waiting for the date until she can officially open her doors to the public.

Due to the COVID-19 pandemic, she has been open only for curbside delivery and by appointment only.

“It’s really hard,” Schlipp said of starting her business during the pandemic. “We have done a little bit of curbside, but it’s tough to do curbside when you are selling furniture or clothing. I have been doing stuff based on appointments. Every time someone sees me, they knock on the door, and we talk.”

As a graduate of Dowagiac Union High School, Schlipp is excited to be back in the community. Although she currently lives in Eau Claire, she knows the people in the area and has daughters who also work in town.

Schlipp said her entrance into retail started with repurposing furniture. The store owner also does custom painting on pieces.

Currently, Schlipp said the storefront includes both the signage for Oh My and Stambaugh’s Mud-Luscious.

As Schlipp navigates owning two locations, Stambaugh will work a couple of days a week, continuing to host classes and sell some of her merchandise.

“We just kind of know each other from the downtown area, and both love to do kind of the same things,” Schlipp said. “She really gets into the classes, and we both sell Iron Orchid.”

Iron Orchid is a company that sells transfers to put on furniture, including ink and stamps.

“You make your own clay molds and glue them on,” Schlipp explained. “They are like flowers and birds. I am still going to carry that line and Michelle’s own pottery line.”

With two payments of rent completed, Schlipp is eager to officially open her doors again to downtown Dowagiac and introduce her business to people in the Sister Lakes Community.

“I’m looking forward officially opening,” Schlipp said. “My passion is to paint furniture, so that’s kind of what I love to do, but I am also selling furniture, jewelry, a line of clothing and have a line of purses. I guess I’m just selling things I love.”