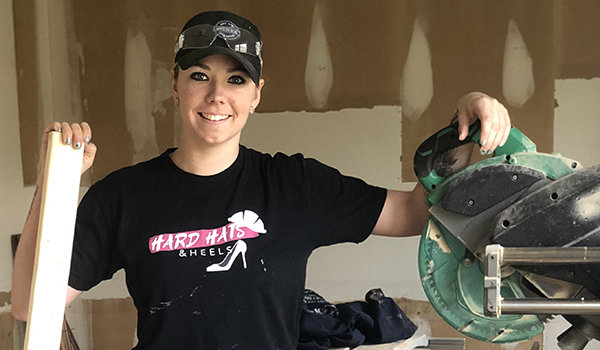 DOWAGIAC — Recent Southwestern Michigan College graduate Victoria Knight is already paying it forward by giving back to her alma mater.

Knight, 24, of Niles, founded a construction company in 2017 and lent its name to the new $1,000 Hard Hats and Heels Skilled Trades Scholarship for students majoring in construction trades-green technology while enrolled in at least 12 credit hours.

A student will be awarded $500 for fall 2020 and $500 for spring 2021 with possibility of renewal. She also wants to establish a trades scholarship at Brandywine High School, from which she graduated in 2013.

“I had a great experience at SMC and I want to give back and have others succeed and grow with me,” said Knight, who as an SMC student in 2017 landed a $2,000 Work Ethic Scholarship from Mike Rowe’s foundation.

Last October Rowe’s crew flew to Michiana from California to feature her in videos. Rowe, who as “Dirty Jobs” host reminded her of her father, Victor, came, too, for a couple hours of conversation.

Knight graduated again from SMC on May 5, 2018, with her associate degree in construction trades-green technology with honors. The month before she had been inducted into Alpha Beta Gamma, the community college business honor society.

Hard Hats and Heels is a two-sided business. There is the construction side doing home improvements for clients across southwest Michigan and northern Indiana, including painting, doors/windows and trim carpentry. Heels is the real estate side. Knight is an agent for Listing Leaders Michigan, a Buchanan real estate agency. Her boyfriend, Matthew Rudlaff, who is also in real estate, backs her up as crew member/painter.

Knight started college to study nursing since other women in her family provide health care. But it didn’t seem to fit Victoria, so she enrolled at SMC to finish a two-year associate in arts in Business degree during 2015-16 while pondering other options. She qualified for Phi Beta Kappa, the international community college honor society.

“I came to school one day and saw the small house being built,” Knight said. “I thought, ‘What the heck is that?’ I’ve built houses with my dad since I was a kid. He’s a truck driver obsessed with tiny houses and got me hooked.”

Not only did she help construct SMC’s small house, Knight expressed interest in working on the college’s $9.6 million Nursing and Health Education Building, but instead joined Big C Lumber from October 2017 to April 2018, when she was hired as volunteer coordinator for Habitat for Humanity of Elkhart County in Goshen.

She also interned with Barton Malow during Campus Crossroads, the University of Notre Dame stadium project, staying on as an administrative assistant in 2016-17.

As one of those people who believe good things come to those who hustle while they wait, going from “insanely busy” to being idled six weeks by COVID-19 has not been easy for Knight, though Gov. Gretchen Whitmer announced a May 7 reopening for construction companies.

Portage Midtown is a sustainable neighborhood infill demonstration project with the goal of contributing to development of a neighborhood-based on the triple bottom line of people, planet and prosperity. In urban planning infill is rededicating land in an urban environment, usually open space, to new construction.

Knight wants to buy one herself for Airbnb, the online marketplace which brokers lodging. The one-bedroom will feature a loft and 18-foot ceiling in 590 square feet. She said there is enough space to eventually build eight. She also hopes to erect homes in her hometown and in Dowagiac in the future.

Even with all of these projects underway, Knight said she beats herself up because she feels like she should be accomplishing more.

Her new scholarships will help give more opportunity to those who want to keep up with her.