DOWAGIAC — Wayfinding signs, which deliver directions to visitors and community members, are getting a spring makeover.

This week, on the back of the city of Dowagiac’s wayfinding signs, 12 pieces of artwork created by students who attended last year’s Fitch Camp will be displayed. The camp, hosted at Cable Lake, has been visited by thousands of Dowagiac youth since 1941.

The journey to getting Fitch Camp art on the city’s signs began four years ago, when city leadership decided to get creative in using the backside of the wayfinding signs sprinkled throughout town.

“We figured that would be a great place to tell people about upcoming events,” said Bobbie Jo Hartline, secretary to the city manager. “We realized there are a lot of events, but there isn’t always a poster for every event. We thought, how could we make this something unique to us?”

Leaders decided to place student art on the back of the wayfinding signs and chose the art based on a competition hosted at the schools. Last year, city leadership visited Fitch Camp, explained the program and encouraged campers to enter.  The only rule for the students’ art was that it had to be designed vertically. 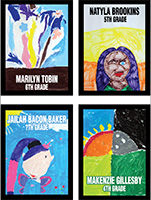 Hartline said once all the art pieces came back, it was challenging to narrow down the 12 pieces of artwork that would be on display throughout the city. After the selection, the works were reproduced on 3-foot-tall pieces of corrugated plastic with vinyl and put into a frame on the backside of the wayfinding signs.

Hartline said the city was slightly behind schedule in getting the signs up this year.

“As soon as we got the posters done, one of our signs was involved in a car accident and toppled over,” she said. “We had to get that replaced and repaired. We were in the process of installing them, and the spring winds came up, and we lost two. We found one but had to make another replacement for the lost one. They are finally all up and together, and I can’t wait for the kids to see them.”

Hartline said several other community members were instrumental in helping with the art submissions, including Chris Cox, the director of Fitch Camp. Also involved was Cathy Lyle, who helped coordinate how the program would be rolled out. Lyle also contacted art teacher Bonnie Latourette, who coached the Fitch Camp students on form, design and inspiration.

“What we got back was a lot of fun,” Hartline said. “I hope the community enjoys seeing something colorful as they drive through town. I know that those pieces catch those visitors’ eyes, and they see how proud their community must be of its kids.”

As colorful portraits and renditions of sunsets cover the back of posters, Hartline said, traditionally, the artwork is gifted back to the student artists at the end of the season.

“Most of all, I hope the kids themselves, those artists see their work larger than life and feel special,” Hartline said. “I hope they feel appreciated, and they are inspired to go on and create new things, whether in the art realm or not.”