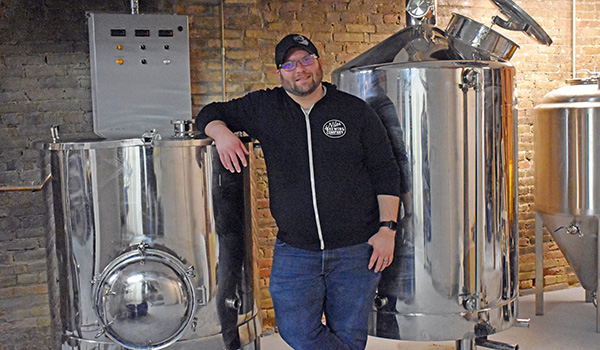 NILES — Niles Brewing Company has passed another milestone on its way to opening its doors. On April 13, the company’s social media read that it had passed all inspections and had received its first craft brewing grain order. Just a few more steps remain until the brewery finds a way to get its beers into the hands of residents.

Owner Brandon Townsley had hoped to have his first brews ready to share with customers by August or September of this year. As the company’s kitchen recently passed inspection, Townsley is now waiting for the licenses required to operate the brewery.

With the licensing year ending in April, and government processes slowing down as COVID-19 response and prevention takes precedence, the wait may be longer than initially expected.

“We are now not anticipating licensing to be in until July,” Townsley said. Between waiting for the state licenses that have been approved to show up, and taking the next step to apply for his brewer’s permit with the federal government, Townsley sees his opening being pushed back.

When he is able to brew the company’s first batches of beer, he will need 30 to 45 days to perfect the process before opening its doors.

Townsley said that if the strong COVID-19 mandates and precautions are still in place by then, the brewery will pivot its focus on packaging its brews for carry out. When the brewery is able to open its taproom room to visitors, he looks forward to offering a wide variety of beers, wine and ciders. Townsley wants to provide a little bit of something for everyone. The brewery will also feature a small menu when the taproom is opened up for guests.

After purchasing the building at 206 E. Main St., the former location of the Hob Nob, in July 2019, Townsley has been working hard to renovate the building. Replacing the roof, removing wall coverings to expose the brick inside, including acid washing it several times, and bolting in the ceiling rafters are just some of the renovations Townsley has been working on. The result is a modernized, industrial space that will be the seating area of the brewery. When entering, eyes are drawn to the bar and tap station, shining silver with the Niles brewing Company logo behind it.

“I want people to come and see all the work that has taken several months of my life to get done,” Townsley said. “We completely understand the safety of everyone is first and foremost.”

Townsley looks forward to introducing his creative beer brewing style. He hopes he can attract both those who are not yet beer lovers and the craft brewing crowd.

“Ideally, I hope to attract non-craft beer drinks to at least give us a shot,” Townsley said. “To see if some of my out-of-the-box beers are something they gravitate towards.

Some examples of the creative beers he looks to introduce to customers when the brewery opens are cream ales, stouts and hazy IPAs.

“That’s what piques my creativity, to make something like a dessert, but to not make it so over the top that it doesn’t taste like a beer,” Townsley said. “It has that middle point when you drink it, you taste everything that goes into it. If you can get it to the point of all meshing together, and it tastes good, you’ve got a winning beer.”

With the brewery’s tanks and equipment installed in the basement, Townsley awaits for his brewer’s license to begin brewing up the first batch. Just like any good beer or wine, he knows that good things take time.

“I originally looked at this building in February, and we didn’t close until July, so that tells you how long it took to secure the building,” Townsley said. “I thought realistically that we were doing great on timing.”

The brewery hosted a preview on Small Business Saturday. After that, Townsley spent the winter renovating the kitchen and the basement for brewing. Before COVID-19 brought down heavy mandates and precautions throughout the state, Townsley felt the momentum picking up towards opening. The licensing process has been slowed by the virus, but Townsley is still looking forward to when they are able to debut his beer to customers.
“I can see the finish line, but it’s one of those things where I can see it, and we can’t cross it just yet,” Townsley said.