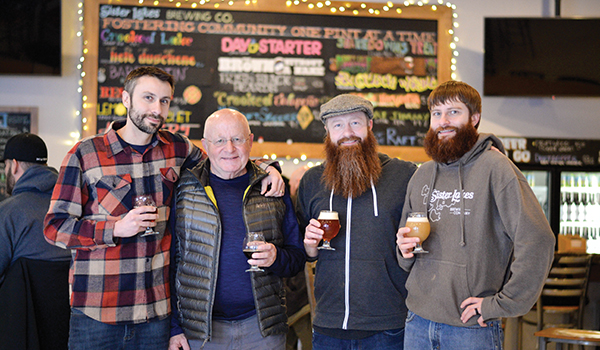 Sister Lakes Brewing Company, 92500 County Road 690, has transitioned from being a community gathering spot to offering beer, wine and cider pickup on Friday and Saturdays.

“Right after the first stay at home order [on March 24], we stayed open for a few weeks doing food, and we decided we wanted to serve the community, and people needed to eat,” said one of the brewery’s owners, Dave Morin. “Every week at the end of the week, we would discuss how things went and do we feel this is the right decision. After a lot of debate, after a few weeks we decided to switch to the beer sales only.”

Morin said the decision was made to keep less people in the building, to limit the amount of staff members cooking. Currently, Sister Lakes Brewery only has one owner present in charge of carry out orders.

“We decided people need to still have access to local, good beer,” Morin added. “We still want to be able to serve the community.”

Now, patrons can order beer all week long online. Within the four hours a week the business has stayed open, Morin said the support from the community has been positive. Patrons can pick up orders on Friday from 4 to 6 p.m. or Saturday from 1 to 3 p.m.

“Overall, our beer sales are clearly down because people aren’t being able to come inside and have a meal and a pint of beer,” he said.

Also impacted by the COVID-19 pandemic are renovations taking place on the brewing company’s 1,500-square foot expansion. The expansion was initiated so the community would have an additional space to rent out for private events and to serve as an overflow space for customers who are waiting to be seated in the brewery. Now, Morin said some of the work for the expansion has halted.

“That is still happening, but it has definitely slowed down,” he said. “A lot of the contractors and the supplies we need have been hard to get ahold of. The contractors have not been able to work.”

However, Morin said, with the brewery not being open five days a week, the owners have had time to work on some of the expansion themselves.

“It is still moving along but not at the timeline we had originally hoped for,” he said. “We are definitely still taking inquiries, but it’s tough without knowing exact dates.”

Morin said the first booked event in the new venue was scheduled for May 18 but had to be canceled.

Just like other businesses in the area, Morin said the brewery is operating week by week and continues to offer beer sales for the time being.

“Depending on how long this goes on, we might start to do food like on a Friday and Saturday pick up schedule,” he said. “Right now, it’s kind of a fluid situation.”

To Morin’s surprise, he said customers have taken a liking to purchasing cases of canned beer, which is unique.

“Typically, people come in, and they will have a meal and take a four pack to go,” he said. “Quite a few people are buying a case or two of beer, which is not the normal for our customers, but it is kind of becoming the new normal.”