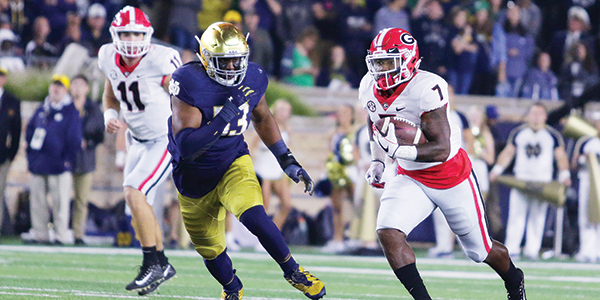 Georgia running back D’Andre Swift (right) was a second-round selection of the Detroit Lions on Saturday. (Leader file photo)

NOVAK: NFL Draft kept me glued to the television

I have to admit, with Michigan’s “Stay Home, Stay Safe” directive, I spent more time watching the National Football League 2020 Draft than I probably would have.

Part of that is I would have been out covering local high school sports last Saturday instead of being sequestered in my home. Another part of it was the way the NFL, ABC, ESPN and the NFL Network chose the cover the draft.

I was one of those skeptical people who, when the league announced it would host the draft as scheduled, thought it was a dumb idea. The draft has become quite the spectacle over the years. With no live crowd in Las Vegas cheering and booing every pick, there was no way the league could capture the emotion of the event.

Boy, was I wrong.

The coverage of the draft via remote set up was better than anyone could have anticipated. In fact, it was so good, that by the third day, NFL Commissioner Roger Goodell, along with those covering it for the networks, were already talking about how they could incorporate some of the technology used this year moving forward.

I think the best part was getting to see so many of the players receiving the call, letting them know they had been drafted and then watching their reaction and the reaction of the family and friends surrounding them. It was also interesting to see how many of these kids seem to live in some pretty spectacular houses.

Then there were the live remotes of the coaches, general managers and owners from the NFL. Those live shots were equally as interesting. Everything from Bill Belichick’s dog to the kids running around and hanging out with the fathers. There were plenty of high-fives to go around.

Heck, I was even interested in seeing part of Dallas Cowboys owner Jerry Jones’ multi-million-dollar yacht that he was doing draft business from.

But the most important part of the weekend was seeing how our local team did in the draft. I think I can honestly say that the Detroit Lions, Chicago Bears and Indianapolis Colts all had pretty solid drafts. I would even go as far as to say that the Lions had an outstanding draft.

Most of the draft grades I have seen for Detroit have been a B+ or higher. The one thing that kept the Lions from getting an A grade across the board was their selection of Wisconsin wide receiver Quintez Cephus in the sixth round with pick No. 166.

The Bears also had a solid draft, although they did leave many scratching their heads by drafting another tight end. Chicago currently has 10 tight ends listed on its roster. Everyone knows the Bears need to shore up that position, but it does seem a bit excessive to have double digits at one position.

You cannot argue the selection, though, from a talent and public relations standpoint. Notre Dame’s Cole Kmet grew up in the Chicago suburbs cheering for the Bears. Fans should fall in love with Cole, especially if he can make the team better at that position.

The Colts traded their first-round pick to San Francisco for a quality defensive lineman DeForest Buckner before surrounding new quarterback Phillip Rivers with some offensive weapons. Michael Pittman, out of USC  , and Jonathan Taylor, of Wisconsin, both taken in the second round, could make an immediate impact for Indianapolis. The Colts also selected a quarterback in Jacob Eason, of Washington. We can only assume he is there to be mentored by Rivers.

The final reason why I spent so much time on the draft this year was that it was live sports on television. I have been craving live sports for a month.

Now, we all have to wait and see how things will progress with the COVID-19 outbreak.

It seems like we could see movement in the National Basketball Association and the National Hockey League. Maybe baseball will return to training camps soon as states begin to relax some stay-at-home restrictions.

Only time will tell. But for now, I loved watching the NFL Draft, and I am looking forward to seeing how they implement some of the technology they used this year moving forward.

MDHHS offers advice for how residents can save on energy costs

LANSING — With Michigan families staying home to slow the spread of COVID-19 and a colder-than-average spring, households may find... read more