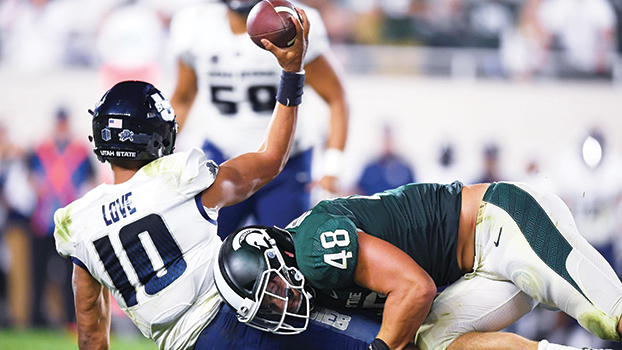 Michigan State’s Kenny Willekes (48) was one of two Spartan players to be drafted over the weekend. (Leader file photo)

EAST LANSING — With the drafting of cornerback Josiah Scott in the fourth round by Jacksonville and Kenny Willekes in the seventh round by Minnesota, Michigan State joined Florida, Michigan and USC as the only schools to have at least one player drafted in every year of the National Football League’s common draft era.

The Jaguars selected Scott at No. 137 overall of the 2020 draft on Saturday. Willekes, an All-American defensive end, was chosen by the Vikings at No. 225 overall.

Michigan State extended its remarkable streak in the NFL Draft, as at least one Spartan has been chosen since 1941, the third-longest streak in the nation (80 straight). The Spartans are one of just four schools to have had at least one player chosen every year since the inception of the common NFL Draft in 1967.

A product of Hamilton, Ohio, Scott started all 30 games of his Spartan career and was a two-time All-Big Ten selection (second team by the media in 2019; third team by the media in 2017). He had a career-high 55 tackles as a junior in 2019 and tied for fourth in the Big Ten during the regular season with 11 passes defended (eight pass break-ups, three interceptions).

Scott finished his Spartan career with 98 tackles, 25 pass breakups and seven interceptions in 30 games, all starting assignments at cornerback. He elected to forgo his senior season to enter the 2020 NFL Draft.

As a junior in 2019, Scott was named to the Jim Thorpe Award Preseason Watch List and was a member of the team’s Eagles Leadership Council. He earned MSU’s Jim Adams Award for being the team’s most unsung hero on defense. Scott recorded a career-high 12 tackles at Ohio State on Oct. 5 and had interceptions against Northwestern, OSU and Maryland.

During his sophomore year in 2018, Scott was sidelined for the first eight games with a knee injury, but still had two interceptions, seven pass breakups and 13 tackles in five games. He was named the Big Ten Co-Defensive Player of the Week after picking off a career-high two passes in the season finale against Rutgers, and was selected the Redbox Bowl Defensive MVP after breaking up a career-high four passes to go along with three tackles vs. Oregon.

Scott is the 10th Spartan defensive back to be selected in the NFL Draft since 2010.

A two-time first-team All-Big Ten selection, Willekes finished his Spartan career ranked No. 1 in school history with 51 tackles for loss and third with 26 sacks. He also earned second-team All-America honors twice from the Walter Camp Football Foundation and was a first-team All-America choice by The Athletic in 2018 after he was named the Big Ten Defensive Lineman of the Year as a junior with a league-leading 20.5 tackles for loss.

The high-motor defensive end recorded 229 career tackles, fourth-most ever among Spartan defensive linemen, and played in 40 career games, including 38 starts and 31 consecutive to close out his career. He also compiled five fumble recoveries, four forced fumbles and four pass breakups.

A 2019 Spartan graduate with a degree in chemistry, Willekes earned a scholarship in the spring of 2017 and hasn’t looked back since. He entered the program as a walk-on linebacker for the 2015 season but emerged as one of the top pass rushers in the nation during his time in East Lansing. Willekes’ improbable journey came full circle on Dec. 9, 2019, when he was named the winner of the Burlsworth Trophy, which is awarded annually to the nation’s best player who was a former walk-on.

Willekes led the team and ranked fifth in the Big Ten with a career-high 10.5 sacks as a senior in 2019 and became the first defensive player in program history to be voted the winner of the Governor’s Award (team MVP) twice. He also led the team with 16.5 tackles for loss, tied for sixth in the conference, and tied his career-high with 78 tackles, most among all-Big Ten defensive lineman. Willekes capped his sensational Spartan career with nine tackles, including for 1.5 sacks, in MSU’s win over Wake Forest in the New Era Pinstripe Bowl and was named to The Associated Press All-Bowl Team for his postseason performance.

Ty Mickiewicz is a senior on the Brandywine baseball team. What has been one of your greatest accomplishments as an... read more