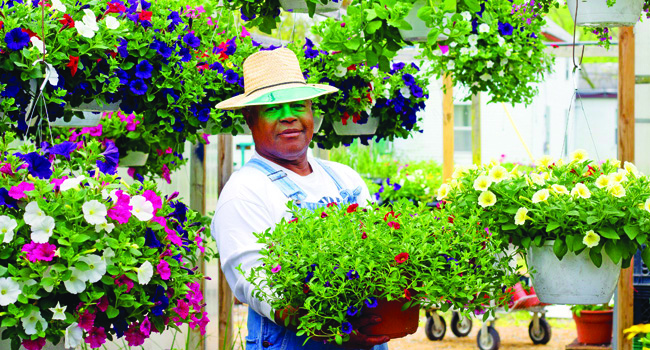 SOUTHWEST MICHIGAN — As spring begins to show itself, Michigan’s greenhouses and nurseries are gearing to wake up from winter’s hibernation.

They are waking up to a halt as Gov. Gretchen Whitmer’s statewide stay-at-home executive order would include plant nurseries, garden centers and greenhouses as nonessential business. Exceptions were made for food and agriculture.

Including nurseries and greenhouses came as a surprise to Dowagiac resident O’Larry Collins, who owns Creekside Greenhouse, 324 Pokagon St., Dowagiac, with his wife, Mildred.

The pair started the greenhouse because of Mildred’s continued involvement with greenhouses throughout her life.

Being located in Dowagiac for more than 25 years, O’Larry said he has steady business throughout the year, but particularly in the summer months.

So far, they plan to open Creekside Greenhouses the first weekend of May, which is standard for the Collins.

“We are waiting to see where things are going to be,” Collins said of Whitmer’s stay-at-home order. “If we don’t open, it will be challenging because we have all the houses full and ready to go basically.”

Collins said when the greenhouse is able to open and sell its plants and flowers, he hopes the Dowagiac community will continue to support their efforts.

“We are counting on Dowagiac people to help us out. We wanted to do a few things this summer, but this has changed things for us. We are hoping we have support of the city, as we always have.”

Included in the Collins’ plans were to possibly throw a party this summer to give back to the city, however that might have to be put on hold, he said.

A greenhouse in Niles is taking another approach to the executive order.

Varner’s Greenhouse and Nursery, which has been providing Michiana with plants and flowers for more than 35 years, is closed to the public due to the issued “Stay Home, Stay Safe” order, but got creative. The nursery and greenhouse is offering “Greenhouse Goods-To-Go, which allows customers to order bulbs, gift cards, ground cover, hanging baskets, mulch, top soil, stone, perennials, potted plants, seeds, bedding plants online or over the phone and then pick them up from the nursery the following day.

The family owned and operated nursery and greenhouse is also offering delivery options for orders of more than $35.

In a Facebook post, the business said the owners are closely monitoring the situation and will open to the public as soon as they are able.

“In the meantime, think spring and stay safe. We appreciate your loyalty and support more than ever,” the post read.