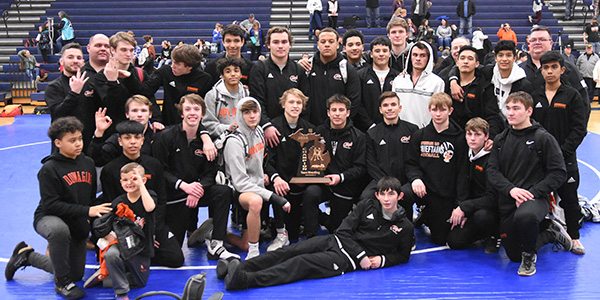 DOWAGIAC — The winter sports season may have been shortened, but that did not keep the Dowagiac sports teams from having an outstanding year.

The Chieftain boys basketball team did not get to complete its season as the Michigan High School Athletic Association, in response to Michigan Gov. Gretchen Whitmer closing schools for the remainder of the year for in-person education, canceled the season. Schools are currently developing e-learning programs to complete the 2019-20 year.

After finishing second in the Wolverine Conference South Division, the boys basketball game advanced to the Division 2 district championship game against Buchanan. The Chieftains and Bucks were supposed to play for the title in Edwardsburg on March 13. The MHSAA suspended all sports on March 12.

Despite that, Dowagiac did land three players on the All-Wolverine Conference team. Senior D.J. Lanier, who surpassed the 1,000-point plateau in what turned out to be his final high school game, was named to the first team. Cailyn Murphy was a second-team pick, while Dashawn Brooks earned honorable mention selection.

The Chieftain wrestling team enjoyed the most success of any of the winter sports teams. Dowagiac was runner-up in the Wolverine Conference. The Chieftains then went on to win their third consecutive Division 3 district and regional championships to advance to the state finals.

Dowagiac was eliminated in the quarterfinals by eventual state champion Dundee for the second straight year.

Besides a Wolverine Conference championship, Simpson also won a Division 3 district title and advanced to the state finals, where he finished fourth at 103 pounds.

Lamberto Paredes was a district runner-up and a state qualifier. Bailey placed fourth at the state finals at 285. Also advancing to the state finals were Schultz, White, Mikey Schlup, McIntosh and Huston were all regional qualifiers.

Chieftain coach Colin Burandt was named the Regional Coach of the Year.

Madison Potter and Evan Phillips both qualified and placed at the varsity state finals. Potter placed ninth and Phillips placed 10th. At the regionals, Potter was a runner-up, Phillips and Carpenter were regional champions.

Team Most Valuable Players were:

By HANNAH HOLLIDAY hannah.holliday@leaderpub.com DOWAGIAC — A manufacturing operation in Dowagiac will transition to a distribution site amid the COVID-19... read more