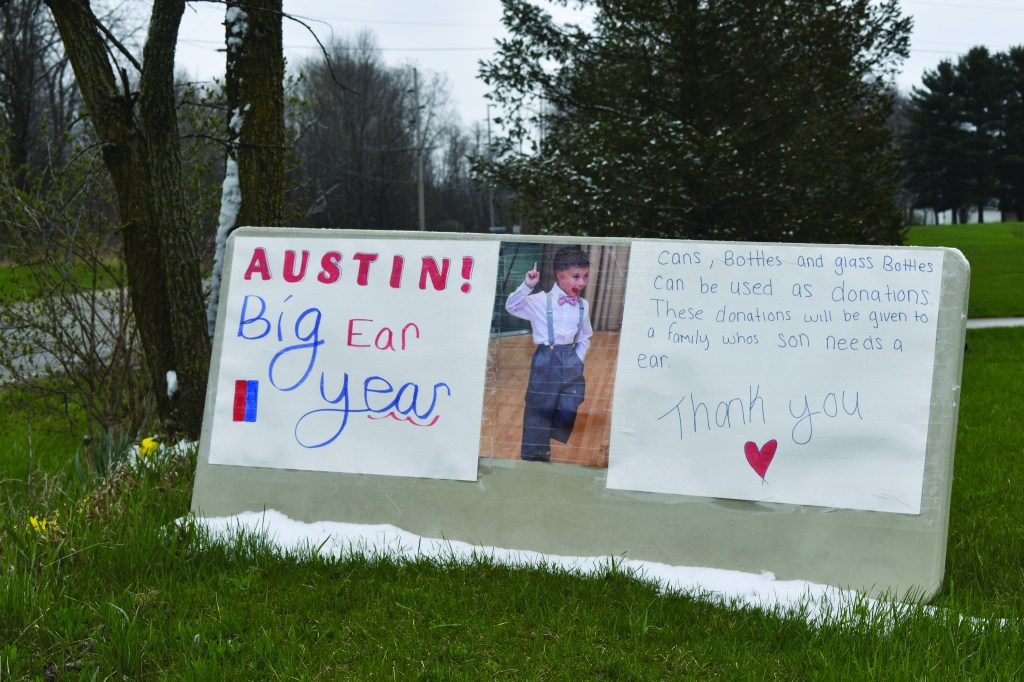 DOWAGIAC — Dowagiac resident Robert Bryant’s garage is filled to the brim with cans and bottles during the COVID-19 pandemic.

What started as a joke on Facebook encouraging people to post the third picture from their camera roll turned into additional fundraising efforts to help 4-year-old Paw Paw resident Austin Collins get an ear.

Collins was born with a condition called microtia and atresia. Microtia is a congenital deformity of the outer ear, which does not allow the ear to fully develop, causing hearing impairments.

Bryant, who posted a picture on Facebook of several bags of cans and bottles sitting in his garage, started a game of who had the biggest pile of returnables sitting idle.

“Somebody who I have on my friends list, Tom Burlington, who used to own Beeson Street Bar in Dowagiac, made a comment on the post about his daughter and son-in-law collecting cans and bottles for their son, Austin, because he needs surgery to reconstruct his ear.”

Bryant donated his pile to Burlington and after reading more about Collins’ story and the cost of the $60,000 procedure and not being covered by his parents’ insurance policy. Bryant made it a challenge to get more people to donate.

“I took some pictures and happened to post something on my Facebook page,” he said. “Social media actually did some good this time.”

In the Facebook post, Bryant told friends and community members if they wanted to donate, he would be happy to pick up their cans and give them to the family.

“It just blew up from there,” Bryant said, now standing in front of one side of his garage stocked to the ceiling with Mountain Dew bottles and pop cans. “When I did that, all my friends started sharing it. I had people from Watervliet messaging me and saying they could be a drop off center, too. We have a place over there picking up stuff for Watervliet and Coloma.”

The Collins family is also collecting pop can tabs, which Bryant has also started collecting in two 5-gallon buckets in his garage.

“It’s been a little bit overwhelming but in a great way,” Bryant said.

Since the COVID-19 pandemic started, Bryant, who is not an essential employee, has had more time on his hands and has been traveling to Edwardsburg, Niles and to Sister Lakes to pick up cans and bottles of people willing to make donations.

“I’ve got the time. Gas happens to be nice and cheap, so that helps out a lot,” he said. “I’ve been doing a lot of driving.”

Also aiding Bryant is his youngest of five sons, Josh, who has helped him pick up the donations while keeping proper social distance. The pair said they have been sanitizing their hands and following safety precautions. Despite the stress surrounding the COVID-19 pandemic, Bryant said germs have not stood in the way of people donating.

“I wasn’t sure if people would be scared of the fact that pop bottles and cans have been on people’s mouths,” Bryant said. “We’ve actually been pretty lucky. When the people get ahold of me, we ask them to have the cans all bagged up.”

After connecting with the Collins family, Bryant learned more about the reconstructive surgery, which will require a specialized surgeon and can involve two or four different operations separated by several months. Bryant plans to keep collecting people’s cans and bottles as long as there is interest in donating.

So far, Bryant said the family has raised about half of their $60,000 goal.

He said right now is a great time for people to get their returnables out of their garage and donate to a worthy cause.

“I am here for the long haul,” he said. “As long as Pam and Roy [Austin Collins’ parents] want to keep this going, I am going to do it and do what I can to help. People just love to help, and it just happened to be something good at a time when everything is bad and everybody is kind of down.”