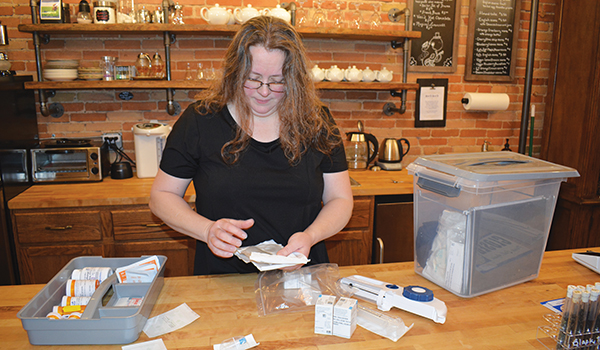 NILES — In the wake of a series of executive orders handed down by Gov. Gretchen Whitmer, downtown Niles has changed.

Fewer footsteps echo against the sidewalks. Retail stores and salons have flipped their signs to closed, and parks sit empty as residents comply with a stay home order to slow the spread of COVID-19.

Despite this, local restaurants continue to see business. Parking spaces on Main Street have been blocked off with orange cones and signs that read “pickup only” as restaurant employees work to ensure customers have easy access to curbside delivery. Walk past the likes of El Amigo Pepe or Pizza Transit, and one would see employees bustling to ensure doors stay open despite a ban on in-person dining.

The lights at one local eatery, 222 E. Main St., remain dark, however.

While Apothica Teas owner Laura Hollister said the decision to close her shop and restaurant completely during the coronavirus outbreak was a difficult one, she has more to lose than just her business.

On an overcast and misty morning in downtown Niles, Hollister stood inside the tea shop she owns wither husband, Shane. Despite the heavy silence that has fallen upon the store since its closing, every inch of the space is covered in whimsy — from the mismatched teacups and tentacled mugs lining the shelves to the steampunk hats and masks decorating the walls. However, as she stood behind the counter, the scene in front of Hollister was anything but whimsical.

In the spot where she typically prepares pots of tea for customers, Hollister sorted through a tall box containing several orange prescription bottles, large medical equipment and several other necessities. Each item inside the box is necessary to keep her son, Nathaniel, alive.

Nathaniel, 29, suffers from hypogammaglobulinemia, an immune-deficiency that affects his ability to produce gamma globulins in the blood, which increases his risk of infections. He also has the mental capacity of a 6- or 7-year-old, affecting his hygiene habits. The combination of his conditions put him at a high risk of serious illness if he were to contract the COVID-19 virus.

“He doesn’t run fevers,” Hollister explained of her son’s condition. “His body doesn’t recognize a threat, so any infection or disease he gets just tears right through him. … We try to keep his immune system held up artificially so that he can manage.”

This uncertainty has forced Hollister to make difficult decisions, such as having one of her sons stay with a relative after potentially coming into contact with the virus and closing her restaurant.

“I always know we could lose [Nathaniel] to something other people don’t have to worry about losing their children to, so we just try to draw our fences as best we can to protect him, while also living our lives,” Hollister said as she wiped tears from her face. “There is so much uncertainty. We decided we would rather not risk the kind of grief that would come if we felt like we could have made a decision to better protect him.”

As she prepares to weather the viral outbreak, she, for the first time, is facing uncertainty not only as a mother of an immunocompromised child but also as a business owner. Having been open less than a year, Hollister said she does not have the capital for Apothica Teas to stay closed for long. However, she is hoping that by pulling back and reducing her expenditures at the beginning of the outbreak, her shop will be able to survive.

“I want to believe the community is going to come back when we open,” she said. “Overall, I am hoping this will preserve my business rather than risk it further.”

Until coronavirus concerns die down, Hollister will be remaining home with her family to protect Nathaniel from potential exposure to the virus. Not only that, but she will also be thinking of ways to improve her business — everything from making spring menus to bookkeeping — so that when she does reopen, it can be better than ever.

“I really think we can come out of this stronger,” she said.

Hollister is also working to keep her sense of humor intact to help her and her family get through the crisis. If one of the few people still walking Niles’ streets were to pass the shop at 222 E. Main, they would see a copper, long-beaked mask sitting in the window, the style reminiscent of masks doctors wore when treating the bubonic plague in 14th Century Europe.

“This one of those times you have to laugh, or you’ll go crazy,” she said, laughing proudly while pointing out the mask. “Focusing on the humor, on the events we are going to host, the menu items we are going to serve, on the world that I know is coming back — that is what is helping me get through the world that is happening now.”

NILES — In a time when many businesses are facing heavy mandates, at least one warehouse in Niles is bursting... read more