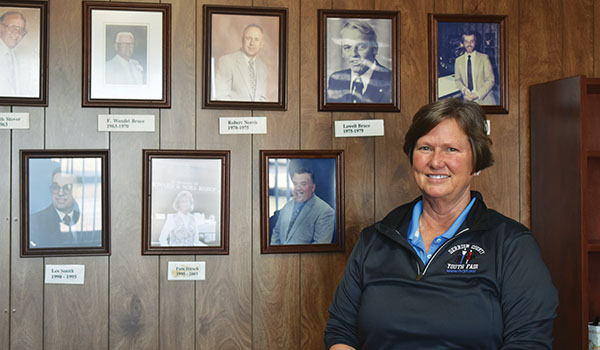 BERRIEN SPRINGS — For one week during the year, Berrien County comes together. The community celebrates a mutual love of corn dogs, as third and fourth generations of families walk the fairgrounds, exhibitors participate for accolades, and visitors join hand in hand for a concert on the grandstand.

Standing behind a wall in the fair office decorated with past fair board presidents, Karen Klug, the secretary on the fair’s board of directors and the fair manager, thinks remembering the fair’s roots is essential.

Klug grew up around the Berrien County Youth Fair as her mother acted as secretary, starting when Klug turned five.

“I’ve been around here my whole life,” Klug said. “I was the fair queen one year and then went from exhibiting to being a volunteer and then becoming involved even deeper than that.”

With several county fairs in the area, Klug views Berrien County Youth Fair as being different because it is youth-focused. Although the fair does have 4-H members who compete, the fair is not a 4-H fair, and anyone, from age five to 20, who lives in Berrien County can participate, she said.

Klug believes the secret to the fair’s continued success is the lessons and memories exhibitors develop.

“I think it has kept going so long because you’ve got folks who have participated as exhibitors and then have gotten the benefits of the lifelong skills,” she said. “They learn sportsmanship, competition and integrity. As an exhibitor, even if they are participating in a skill exhibit, and they sew a dress or bake four cookies, they learn how to complete something.”

At the fair, exhibitors earn free passes and also can receive a, b or c place ribbons, as well as a premium for exhibiting.

Klug said the board of directors is proud of the many third and fourth generations of families who participate in the Berrien County Youth Fair.

“They start as exhibitors, and then they see what they’ve gotten from the fair, and they want to give back,” she said. “As they have children, they get their own children involved. It’s not just one week out of the year. It’s an event that once you get hooked it’s, ‘Oh my god its fair week, I got to go to the fair.’”

With an emphasis on youth, the Berrien County Youth Fair has stayed true to tradition by creating a family-friendly environment. Visitors will not find games of chance or alcohol on the property.

“At other fairs, those are big moneymakers,” Klug said. “That’s something that 75 years ago that same board that was the structure that they felt was important and has continued for those 75 years.”

During the fair, volunteers like police officers, firefighters and EMTs work to make everyone feel safe, Klug said. Overall, the atmosphere is everybody looks out for everybody. Klug calls the many volunteers a “fair family.” Without the dedication of volunteers, Klug said the fair would not be possible. The fair also has more than 70 committees, which bring expertise to the table and help make the competition part of the fair happen.

“We are fortunate that we have people in our county that are willing to volunteer and give their time and talents to make the fair a success each year,” she said.

Part of developing relationships includes having positive interactions with vendors and concessionaires. The fair has used the same ride company for more than 70 of its 75 years, Klug said.

“We have developed some of those long-term relationships that make it easier each year from year to year to do it again,” she added.

As traditions are upheld, sometimes unexpected challenges can arise. In 2016, Berrien County got eight inches of rain during fair week. In 2017, the fair was “slim,” Klug said. Sometimes funding a fair can be a challenge. However, Klug said the board of directors works to plan and stretch its dollars as far as it can to continue to improve peoples’ fair experiences. From April to October, events are hosted on the fairgrounds every other weekend, Klug said. Rental dollars help the Berrien County Youth Fair stay afloat.

For the 75th celebration, plans are still being fine-tuned. However, exhibitors can expect champion and grand champion ribbons to be adorned with a distinctive 75th-anniversary logo. Organizers are also taking orders for decade T-shirts to commemorate the many decades of exhibitors starting in the 1940s and ending in 2020.

After many years of volunteering with the fair, Klug still has a favorite part of Berrien County Youth Fair week.

“The best part is when you go to one of the trophy presentations — it doesn’t have to be a little kid — it could be a big kid, but the smile on their face of their accomplishment and them feeling like the fair has been an important part of their life. I can say for all 18 of our board members, we are here for the kids, and we want to hopefully be able to continue this for the kids of the future.”

NILES — A Niles tattoo and piercing shop has had its license suspended following an investigation from health department officials.... read more