LWV details how to vote early for 2020’s four elections 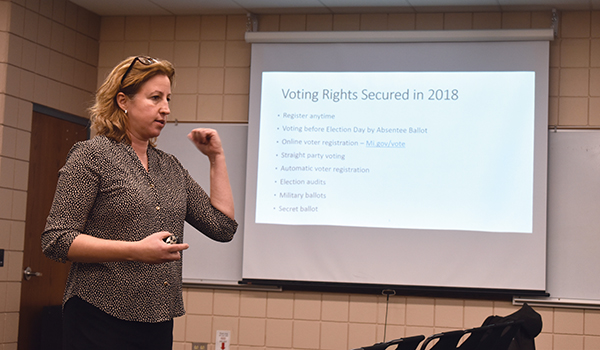 SOUTHWEST MICHIGAN — A few days out from the March 10 presidential primary election, the League of Women Voters of Berrien and Cass Counties hosted a town hall on new voting rights, namely early voting.

“Early voting” is another phrase for absentee voting. Thanks to a state constitutional amendment approved by voters in 2018, an absentee ballot is not as restrictive to obtain, said League member Amy Scrima, who facilitated the town hall last Thursday at Berrien Regional Educational Service Agency, 711 St. Joseph Ave., Berrien Springs.

Scrima, other League members and local clerks in attendance all said early voting will allow people to make more informed choices, not need to vote on an election day in person and allow local candidates to receive more attention.

“This opens up a whole new opportunity for people to fit their voice, their choice and their representation into their schedule instead of having to make [an election day] work with their schedule,” Scrima said.

Absentee voting, where voters cast their ballot before an election away from the polls, has existed in Michigan prior to constitutional changes. In order to receive one, however, someone had to have a reason for not voting in person, such as a vacation, a sickness or a disability.

People also had to register for an absentee ballot in person from their clerk the first time they did so. They would then either return the ballot by mail or return it to their clerk in person.

Now, people do not need to register for an absentee ballot in person to vote early for the first time, nor do they need to have a reason for doing so.

Scrima said people can now even request an absentee ballot but not use it, so long as they surrender the ballot to their local clerk. If they do fill out the ballot and send it in, they can also request it to be nixed. That, clerks said, comes in handy if a candidate someone voted for drops out before Michigan’s election day.

Both the local and state League of Women Voters see early voting as a great tool to bring in people who are typically disadvantaged when it comes to voting on an election day. Scrima said students away at college, people with disabilities, people without reliable transportation, people unable to leave work and people in immigrant families are among the groups.

“This is going to allow more people under all conditions to participate in our democracy,” Scrima said.

Its website, vote411.org, and its corresponding printout are available for people to learn about candidates, millages, proposals and other items on a ballot before voting.

The League sends out a set of questions to candidates of a certain office. The candidates can choose to respond and provide additional information about themselves.

For items such as millages and proposals, the League provides basic information on each.

Scrima said many people may not know all of the people on a ballot if they vote in person during election day. Vote411.org and early voting allows a person to research each candidate better.

At a time when some Americans feel their elections may be compromised, Scrima said secret ballots and election audits are especially important. Both have previously existed in Michigan law but are now strengthened.

Oronoko Charter Township clerk Suzanne Renton said she has always felt that elections in Berrien County were secure thanks to audits, double-checking and thorough tabulation.

Ian Haight, a former clerk of Hagar Township, agreed. He said he wished more people would attend required public events where local clerks test their election equipment prior to an election.

Instead of security, Renton is concerned about workload. Berrien Springs and Andrews University are part of her township. With new Michigan laws allowing people to register and vote on the same day, she thinks many college students could flood her office March 10.

Renton is glad to see voter rights expanded, however. She said there will just be an adjustment phase for clerks.

The March 10 will serve as a great learning experience, League officials said. It is the first of four elections this year election.

A local special election will be May 5. The election for state and local offices will be Aug. 4. The general election for all levels of government will be Nov. 3.