Buchanan teen hopes to be among first female Eagle Scouts 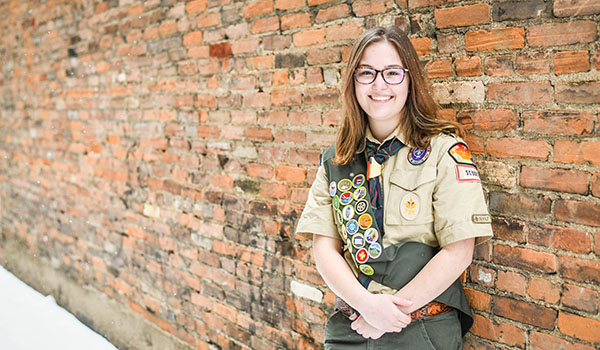 Growing up, Buchanan resident Emily Long had one dream that she wanted more than anything: to be an Eagle Scout.

The dream was an impossible one. Eagle Scout is the highest rank a Boy Scout could achieve, and, as a girl, Long was not permitted to join the organization.

Still, Long never gave up on her dream. Now, at 18 years old, the Buchanan High School student is seeing her dream come true, and — if all goes as planned — she will be among the first women to be inducted as an Eagle Scout later this year.

On Feb. 1, 2019, the Boy Scouts of America began allowing girls ages 11 to 17 to join all activities, changing the name of its Boy Scouts program to Scouts BSA. The change, which BSA officials said was spurred by parent requests, allows girls to enroll in the BSA program in separate troops than boys.

Younger girls were able to join the Cub Scouts in 2018.

Though BSA officials have not released official enrollment numbers, radio broadcasting network Voice of America reported that, as of April 2019, approximately 15,000 girls had joined more than 2,000 new troops nationwide.

Long remembers the day BSA announced it would allow girls to join its ranks clearly. She was home sick from school, curled up in bed when she caught a clip on the news announcing the change.

“I hopped right up out of bed, rushed over to my mom, and said, ‘look what is on the news!’” Long recalled, smiling. “We went to watch the big TV in the living room, and they said it wouldn’t happen until 2019, and my heart sank because I wouldn’t have enough time to [achieve Eagle Scout before turning 18]. It killed the excitement just a little bit because I was still happy for all the other girls who would be able to do it. But selfishly, I was disappointed for me.”

It was not until later that she learned BSA was offering an extension period for girls newly entering the program. Then, she knew she was on the road to achieving her dream.

The road to Eagle Scout

“I’ve always been into the outdoors. I grew up in the country, with the woods, playing outside,” she said. “Eventually, your own acres become small, and you need to explore more.”

Long got her chance to explore more when her brother, Xander, joined Boy Scouts. Long accompanied him to every meeting and made fond memories even though she was not able to earn badges or move up in the ranks. Even when her brother dropped out of the program, Long’s desire to join a Boy Scout troop never waned. She tried other programs, such as the Girl Scouts of the USA, but found that they were not the right fit.

To stay with BSA, Long joined the organization’s co-ed Venturing program when she was 14 years old. Now, as an official BSA scout, Long’s khaki uniform contains more than a dozen colorful patches featuring the activities she was not allowed to earn badges for in her younger years.

“I just found more passion in [BSA] mostly because I spent so much time here,” she said. “The program has been around so long, and they are going to make such great changes.”

To achieve her ultimate goal of becoming an Eagle Scout, Long must complete all requirements — which include earning at least 21 merit badges, leading a service project, serving in a position of responsibility and living by “Scout Spirit” — by Feb. 1, 2021. However, Long is hoping to complete her requirements much sooner than that. If she finishes her requirements by Oct. 1, she will be able to be a member of the first class of female Eagle Scouts in history.

“That is definitely the goal, and so far, the timeline says that I can,” Long said, a slightly nervous laugh sneaking into her usually confident voice.

Since the first day she was able to become a member of BSA, Long has been working to achieve her goal of becoming one of the first female Eagle Scouts. Initially, she served as the patrol leader for a girls’ troop in Valparaiso, Indiana, driving hours each week to meet with her troop, spending time before and after school working on merit badges and camping most weekends — all to ensure that she stayed on track to make her timeline. Now, she is a “lone scout,” a scout that operates without a troop, and keeps busy by brainstorming different ideas for her Eagle Scout service project. So far, she has floated several ideas from extending a boardwalk in Buchanan to organizing a community cleanup.

“Obviously, it would mean a lot to me to be in that first group,” Long said. “I think, to younger me, it would mean a lot. Back then, I didn’t know if this was even possible. Physically, I knew it was possible, but it was not [possible] to go through the program all the way and get recognized and actually earn everything.”

When Long tells people she is a female member of BSA, she tends to get one of two reactions. Either she is met with admiration and congratulations or she is met with anger and ridicule. For the most part, Long said she lets the feedback roll off her back, but she does enjoy the more positive comments as they help keep her spirits up when she receives a negative reaction.

“It’s different because not many [girls] are doing it and not that many people understand it,” Long said.

One person who is proud of Long for following her dream, no matter how impossible it seemed for so many years, is her mother, Kate Long, of Buchanan.

“I am very proud of her progress in the last year. She is right on track to be in the very first group of women Eagle Scouts, which is a very exciting accomplishment and something she can keep on her resume forever,” Kate said.

While Long said she finds it strange to call herself a role model, her mother sees the title as deserved, saying she hopes that other young girls will see the payoff Long earned after pursuing her “impossible dream.”

“I hope that girls learn about what Emily is doing and know that there is more out there for them than the stereotypical things,” Kate said. “They can do these types of activities and succeed and be just as good as the boys.”

As she continues her quest to become one of the first-ever female Eagle Scouts, Long knows that eyes will be on her. Some might be approving. Some might be disapproving, but some might just be girls like her younger self, who see joining a traditionally male-oriented group as an impossible task.

Long said she hopes seeing her and other girls go through the BSA program might encourage others also to pursue it if it is a program that fits their personality, interests and goals.

“You just have to keep at it. It’s not going to happen if you don’t try,” she said. “Sometimes, things might get slower for a while, but it doesn’t go away.”