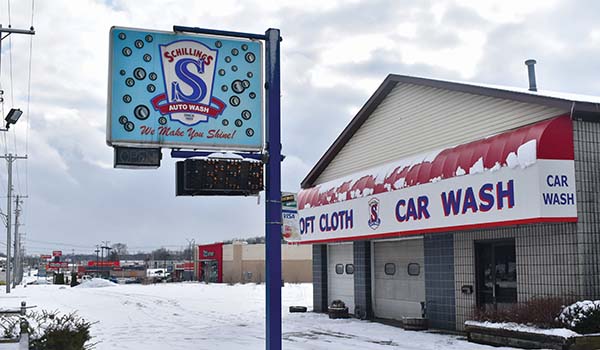 On Wednesday evening, the Niles Planning Commission approved site plans for a Drive & Shine to be built at 518 S. 11th St., the site of the former Schilling’s Auto Wash.

“It’s pretty interesting that Green Stem took over a quick lube place and turned it into a marijuana business, and it opened up the market, and we’ve got a new car wash coming in,” said commissioner John DiCostanzo.

Both businesses are projected to be multi-million-dollar investments. Drive & Shine’s future Niles auto care location has a $10 million price tag.

“We don’t have any this big in this area,” said owner Haji Tehrani, whose business has seven locations in southwest Michigan and northern Indiana.

Tehrani said construction would likely start in May and be done by the end of the year.

It would have a lube center, a carwash and a vacuum center for vehicles. Five entrances would be available from Michigan and S. 11th streets, each leading to a different part of the complex. Cars would then drive clockwise around the property, using any number of its offerings if needed.

Along with new buildings at the property, lighting and buried cables will be installed. Instead of the site being pavement-only, green landscaping will butt up to new sidewalks along some areas.

Tehrani and other Drive & Shine leadership have worked with city staff for the past two months on site plans. The biggest concern was drainage, given the water used to clean cars and the amount of nonpermeable pavement on and around the property.

A few blocks down from the former Schilling’s site, Green Stem’s auto care remodel is complete and prime for opening.

The provisioner renovated Sparkle Quik Lube into a site that will sell and store marijuana products starting Monday.

A public hearing on the business expanding to recreational marijuana sales will take place at the next Niles Planning Commission meeting at 5:30 p.m. Wednesday, March 18.

Green Stem is also renovating part of 901 Wayne St., the site of the former Simplicity Pattern Company, for marijuana growing and processing.  Within a few years, the facility, called Simplicity Farms, hopes to grow 6,000 plants at once.

George Lynch and his wife, Denise, bought the entire 55,000 square-foot complex their grow operation is located in. Some space will be rented out. Gary Vettese, of Clinton Township, Michigan, is one prospective renter.

At the Wednesday planning commission meeting, a public hearing on a processing center within the property was granted unanimously.

Vettese hopes to use the 2,000-square-foot rental space to eventually process the hemp he grows in Niles Charter Township.

Hemp is a cannabis plant that contains less than 0.3 percent THC, the psychoactive compound in some marijuana products. Hemp is commonly used as textile fiber, biomass or non-intoxicating products for medicinal use.

He would spend the first half-year of operation packing marijuana products rather than extracting compounds from them during processing.

Vettese would transport his hemp to the Niles facility and process it to produce cannabinoid products. His focus is lotions, which he said can be used to treat inflammation, aches, pains and muscle spasms.

While Niles Charter Township has ordinances against growing medical and recreational marijuana, it does not have one against hemp. To legally grow hemp, a farmer must receive a permit from the Michigan Department of Licensing and Regulatory Affairs.

At the time of publishing, Vettese did not respond to confirm he was permitted to grow through LARA.