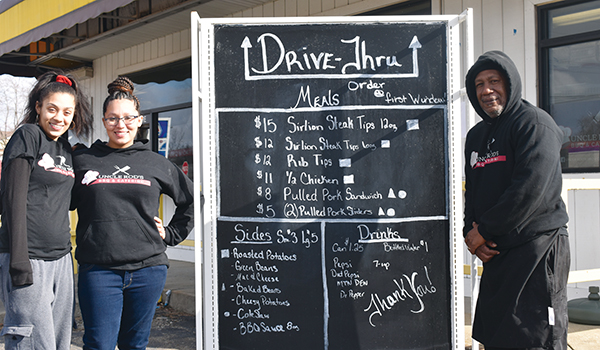 NILES — Longtime fans of Uncle Rod’s BBQ & Catering have watched the Niles business grow from an occasional side business to a constant food vendor in parking lots on S. 11th Street.

On Saturday, Feb. 15, customers celebrated alongside owner Rod Glenn and his family as they reopened the business as a brick and mortar.

Passersby can stop by for free smells of smoked pork, steak, chicken and vegetables as early as 7 a.m. each work morning.

That is when Rod begins to prepare his smoker for the day — that is, at least, until he runs low. Then, he will prepare more food to meet demand.

The cooker is in the back of the property’s parking lot, all but its smoke closed off to the public eye. The true focus for customers will be the small building where food is prepared and delivered by drive-through or concession stand-style.

Brittani, Rod’s daughter, misses the vending stand she helped work for years, but she is glad to see the business move up.

“When we were outside, we really talked with our customers,” she said. “Each one of us, we got to interact with every customer. This summer, we intend to do that more because we can put out picnic tables and expand so we can actually mingle and talk to them.”

In the meantime, she will greet longtime fans and newcomers from the business’ windows or through catered events, serving meals such as sirloin tips, pulled pork, cheesy potatoes, coleslaw and leg quarters.

Years ago, Brittani and her eight siblings used to help their father sell meals as a side job. Rod’s full-time job covered living expenses, but the food helped fund fun activities.

That turned into an occasional food stand at the corner of Fifth and Sycamore streets, where Seven Days Party Place now is.

“I didn’t take it serious,” Rod said. “I just did it every once in a while, and then I realized we could make some good money.”

Rod took a few-year hiatus from cooking, picking up tips at culinary school and helping open restaurants such as Café Navarre Bar & Restaurant.

To meet demand, he opened a stand near Schilling’s Auto Wash on S. 11th Street, where he served meals on the weekends. Last year, he extended hours to Thursdays and Fridays.

After closing for the season in November, he began the transition to the 1401 S. 11th property, most recently occupied by Mama D’s Italian Eatery.

“You think it’s going to be so easy, because everything is so fun and games out there,” Brittani said about vending outdoors. “But it’s like, ‘Uh oh. Everything’s for real.’”

Opening day was hectic, she admitted, but now the family staff has found their stride.

Brittani said her family’s goal is to “dig our roots in here first,” but Uncle Rod’s BBQ & Catering has plans to expand past its new building. The business is working on obtaining a food trailer, like those seen at fairs, so it can sell its meals at different events.