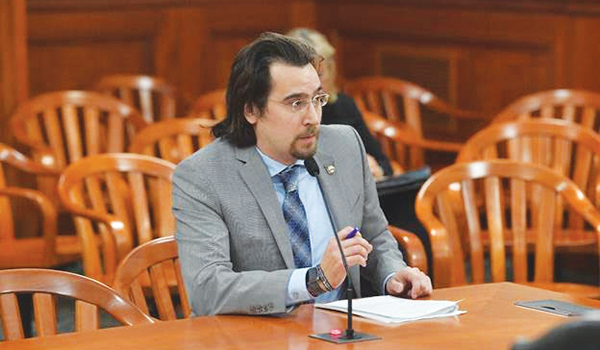 LANSING — Two days before the Berrien County Board of Commissioners declined to make the county null from gun regulations last Thursday, a state representative from the county testified for his gun rights bill.

Brad Paquette, who represents Niles and Buchanan, said his time in front of the House Military, Veterans and Homeland Security Committee went well, but bipartisanship will likely water down his bill’s original goals.

Paquette’s bill, introduced on Oct. 15, 2019, would eliminate the application renewal fee for concealed pistol licenses. The renewal costs the same as the initial license application — $100 with a $15 fee. The license must be renewed each year.

Paquette said that the required training and limited screening that is required for concealed pistol licenses and renewals would be kept in place if his bill is signed into law.

Some Democrats on the committee Paquette testified to, however, were opposed to the freshman Republican’s bill. Paquette thinks Democratic Gov.Gretchen Whitmer would be, too. He said Whitmer has told Congress she will only sign bipartisan bills into law.

Paquette said he is fine with these political realities in the Republican-controlled House.

“I love to work with other people, especially other people than I politically,” he said. “You can have a bill. You can introduce a bill, but if you don’t have the bipartisan support, it’s not going to go anywhere.”

Paquette thinks the bill will be amended by the House Military, Veterans and Homeland Security Committee to cap the license renewal fee as it currently stands rather than remove it entirely.

That would allow money made on the licenses to continue to fund public safety. According to the House Fiscal Agency, $79 per application is credited toward the Michigan State Police’s general fund. The remaining $36 is placed in a concealed pistol license fund in the county where the application was filed.

Paquette said he was inspired to introduce the bill as someone with a concealed license and from listening to some constituents. A Detroit man he met, who had to defend himself while walking home from an office party, further cemented his belief in easing access to guns through fee elimination.

The state representative would not comment specifically on other bills in House committees that would bolster gun rights, but he emphasized bipartisanship and noted he was not in full support of a few.

Other gun bills included one that would allow concealed carry in some places considered gun-free, such as hospitals and churches. Another would make a concealed pistol license unnecessary to carry a concealed weapon while also eliminating restrictions to carry and store such weapons in vehicles.

These bills were introduced around the same time as Paquette’s by other Republican legislators.

Two other bills in House committees could impact Michigan’s gun laws symbolically and literally. One would reaffirm the right for Michigan residents to keep and bear arms. The other designates Michigan as a Second Amendment sanctuary state.

The Berrien County Board of Commissioners declined a vote to make their county a Second Amendment sanctuary last Thursday. If they approved the resolution, its wording would give some county officials the authority to oppose gun regulation laws they deemed unconstitutional.

Some board members declined the vote because the ability to deem laws unconstitutional was in the court’s power, not their own. Instead, some board members said to approach Michigan legislators to demand gun law changes.