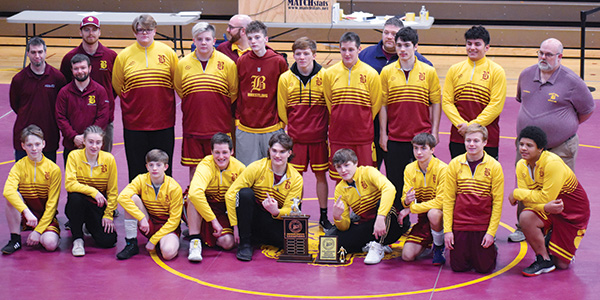 NILES — Returning to Brandywine after a short hiatus is a BCS Athletic Conference wrestling championship after the Bobcats won the league tournament on Saturday.

The Bobcats were led by four wrestlers, who won individual conference championships and ended the tournament with a team score of 244 points. Buchanan followed behind with 211.5 points, and Comstock placed third with 107 points.

“It feels great,” said veteran Brandywine coach Rex Pomranka, following his team’s outright championship. “It’s been a while since we’ve won the conference.”

Saturday’s success was not without a few upsets, Pomranka said. However, the team found a spark in some of its backup wrestlers.

Now, with the conference tournament behind it, Pomranka said next week is when the real season will begin.

“There is always little stuff we have to work on, but its more individually,” he said. “We have to fine-tune it by next week.”

The Bobcats will go up against the Bucks in the first round. Dowagiac will face Berrien Springs in the other semifinal. Wrestling begins at 6 p.m.

Wednesday will mark the third meeting between the two sides in less than a week.

Pomranka said competition against Buchanan was close in some spots, while in other areas, Brandywine had the advantage.

“We did a little moving around that they weren’t expecting,” he said. “We try to get the most matches and score the most points.”

“I am proud of the guys,” said Buchanan head coach Andy Riggs. “We had a lot of inexperience going on, but we put together a good day.”

Riggs said he was impressed with wrestlers on his team who were not number ones but still had impressive performances.

“We had some guys who aren’t exactly our number one guys, who had great days today,” Riggs said. “Overall, I am happy with their performance today. You can’t ask for much more than whatever they got. I’ll take that any day of the week.”

Riggs used Buchanan wrestler Skylar Mittan (285) as an example of one wrestler whose performance stood out.

“He wound up taking fourth, but he’s our No. 2 guy,” Riggs said. “He wasn’t supposed to place, so that’s great for him. We are happy about that kind of stuff.”

On Saturday, the Bobcats and Bucks will travel to Constantine for individual districts.