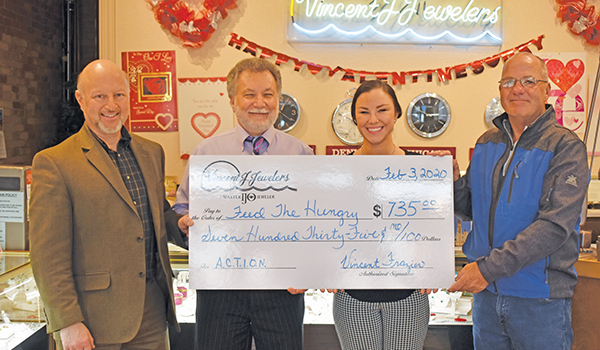 DOWAGIAC — Inside Vincent J. Jewelers on Monday afternoon, Jim Allen, chairperson of the C. Wimberley Automotive’s Feed the Hungry campaign, shared a record-breaking announcement. Alongside him stood Jeff Neumann, the media liaison for ACTION Ministries, Jim Frazier, the owner of Vincent J. Jewelers, and his daughter, Angela Roberts, who works alongside her father at the shop.

“My favorite part about this year was that it was the easiest year,” Neumann said. “People jumped up and started donating money right away.”

“Those 20 trucks will feed 100 families each time. It’s been a blessing,” Neumann said.

This year, Allen said people were more aware of the Feed the Hungry campaign. New to 2019, Allen created a website, cwimberleyfeedthehungry.com, with more information about the campaign and testimonials.

Allen also said people often donate because they know the food and money will stay in the area, and that 100 percent of their donations are donated.

“We have a couple of expenses, but not many,” Neumann said. “This was just an extra blessing. It was an extra outpouring of people giving without being asked.”

Allen plans to keep the goal at $20,000 as he is confident the community can hit it every year. As December 2019 neared, Allen worked to collect last-minute donations.

“The city just rallies,” Allen said. “Cass County has also been very involved with donations. People stop me on the street because they have either $5, $10 or $15 to donate. Every dollar buys $6 of food.”

“We purchase the earrings from a supplier,” said Frazier. “We absorb those costs and anything we take in. We donate $10 directly to Feed the Hungry.”

Every year, community groups come together to support Feed the Hungry, including local businesses in Dowagiac and Cass County. As visitors walk downtown, they can see stickers on the windows of local businesses supporting the campaign.

“They raised $30,000 in Dowagiac. That just floored me,” said Frazier. “There are so many people who benefit from that.”

BAJA CALIFORNIA, MEXICO — A former Bridgman man charged with criminal sexual conduct and accosting a minor in 2015 was... read more