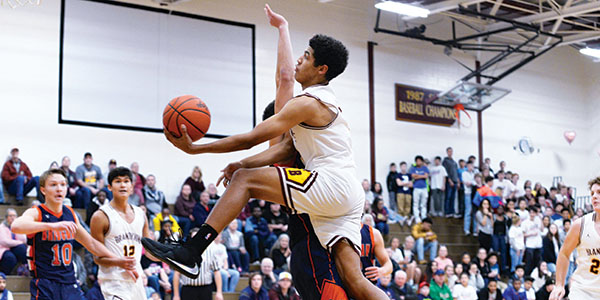 NILES — The Brandywine boys basketball team improved to 3-0 on the season with a 52-36 non-conference win over Kalamazoo Hackett Tuesday night.

In other non-conference play, Buchanan improved to 2-1 with a 72-44 win over Constantine.

The Bobcats jumped out to a 15-3 first-quarter advantage and never looked back.

The Fighting Irish (2-2) trailed Brandywine 24-15 at halftime and 41-28 heading into the fourth quarter.

Tommy Keyte and Stephen Kwapis both had six points to lead Hackett.

After trailing the Falcons 15-14 after one quarter, host Buchanan outscored Constantine 57-29 over the final three quarters to pick up the win.

Chris Young had a game-high 24 points to lead the Bucks, while Logan Carson added 16 points.

Corey King had 14 points for the Falcons.

Host Loy Norrix doubled up the Vikings (18-9) in the opening quarter and was never challenged after that.

Niles (1-2) was led by Demarien Nichols and joey Bartowski, both of whom scored 11 points.

The Vikings return to action Jan. 7 when they travel to New Buffalo for a non-conference contest.

The Eddies (2-0) was unable to put Paw Paw away. Edwardsburg led 14-6 after one quarter only to have the visiting team roar back to tie the game at 28-28 by halftime.

The Eddies opened up a 45-38 advantage after three quarters, but were outscored 17-10 in the fourth quarter as Paw Paw forced a 55-55 tie at the end of regulation.

Edwardsburg outscored Paw Paw 12-8 in overtime to pick up the victory.