Bobcats win on and off the court 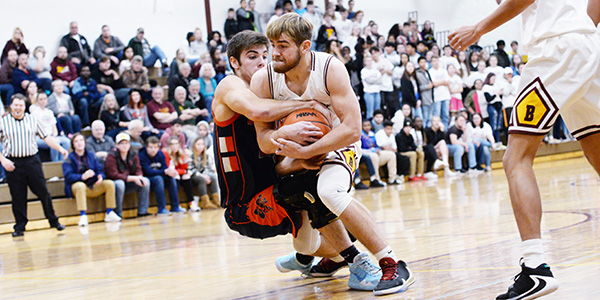 NILES — The Brandywine community had much to celebrate on the basketball court Friday night.

The Lady Cats secured a 50-22 BCS Athletic Conference Red Division win over Bridgman, while the boys team held on for an intense 64-54 victory over the Bees.

But the night was about more than just the game.

For the last decade, the Brandywine community has come together to raise more than $30,000 for the Brian Parker Foundation with its annual Cats for the Cure game.

Members of the basketball program sell T-shirts or accept donations, which assist the foundation in providing educational materials, research grants, monetary assistance and monetary support to those who have cancer.

“To be able to raise that kind of money for this foundation speaks volumes about our Brandywine community,” girls head coach Josh Hood said. “This foundation does so much for southwest Michigan, and this is our way of saying ‘thank you’ and helping them continue to do what they do. We are very grateful for the Parkers, and we hope to keep going strong for many years to come.”

In game action, Hood’s Bobcats held the Bees to just three points in the first half, thanks to a dominating defensive performance. Brandywine’s half-court press was the biggest challenge for Bridgman, even though Hood said they still have a lot to work on.

They host Kalamazoo Hackett Catholic on Tuesday and Comstock, which Brandywine has not beaten in three years, on Friday.

Boys head coach Nate Knapp had a much more challenging task on his hands with Bridgman as both teams came out ready for an intense match-up.

Brandywine was ahead 14-10 after the first quarter of play, but the Bees took over at halftime with a 27-23 lead.

Knapp said his team came out fired up, but they simply were not playing smart.

“Bridgman is always a big game for us, so our guys were ready for a battle and were pumped up, but we all got a little carried away in the first half and made a lot of mistakes we shouldn’t have, myself included” Knapp said.

Brandywine’s halftime focus was on regrouping and playing its game, which allowed for a better second-half performance. Midway through the third quarter — after trailing Bridgman by six — the Bobcats finally took control of the game and never allowed the Bees to regain the lead.

Jordan Abrams had the game-high 21 points for Brandywine, with Jaelen Briggs adding nine and Kendall Chrisman ending with eight.

Like the Lady Cats, the boys also have a tough week of games ahead. Knapp said he loaded his schedule with tough teams this year in an effort to better prepare for tournament play.

“We’ve got a big test coming up this week with Hackett and Comstock,” Knapp said. “Our biggest goal is to play the game we know how to play and keep focused.”