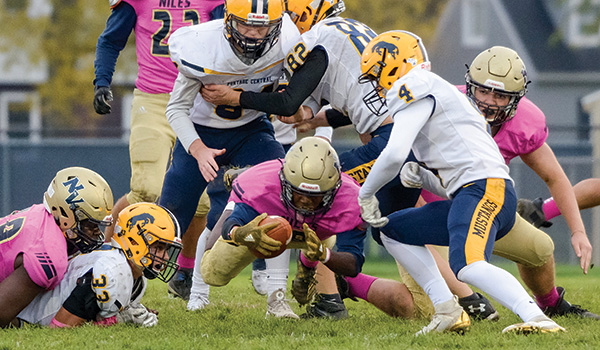 NILES — The Niles football team saw its season come to an end Friday night after they were defeated 21-6 by the Portage Central Mustangs.

Naturally, a 2-7 final record wasn’t exactly the Viking’s plan for their season, yet they still were able to look back fondly at the memories and experiences they’ve had as a team.

“Always being able to smile and laugh with your brothers and teammates, and being able to look at them and know that they have your back, is something that you’ll remember forever,” said senior running back Javond Ball.

“There’s a lot of good that comes out of a not-so-good season,” Lake said. “I’ve come to realize it’s the little things that mean the most.”

Ball and Lake provided a majority of the Vikings offense on the night as Ball was consistently dragging defenders for extra yardage, and Lake delivered the only points of the game on a bomb of a throw to fellow senior Nate Goins for a 54 yard touchdown.

While the team was unable to end their season with a victory on the field, they were able to find wins where it truly mattered.

The blue and gold colors usually worn by the team were noticeably absent, as the team’s bright pink uniforms punctuated a week of fundraising for Breast Cancer awareness.

Head coach Joe Sassano was also proud of the way his team battled throughout the season.

“This team was resilient. They fought hard, and they never quit no matter what the score was,” Sassano said.

Moving forward, next season offers a tangible optimism for the Vikings as the school will be joining the BCS Athletic Conference, which should allow for more even match-ups in the future.

“We were the only Class B team on our schedule. We played nine class A schools this year,” Sassano said. “So I’m proud of the way the kids handled themselves against bigger schools and bigger roster sizes.”

He was also encouraged by the positive culture and the amount of underclassmen who registered playing time as something to build on going into next year.

The Viking’s offseason focus now turns towards the weight room as this year’s results and next year’s promise provide all the motivation they will need.