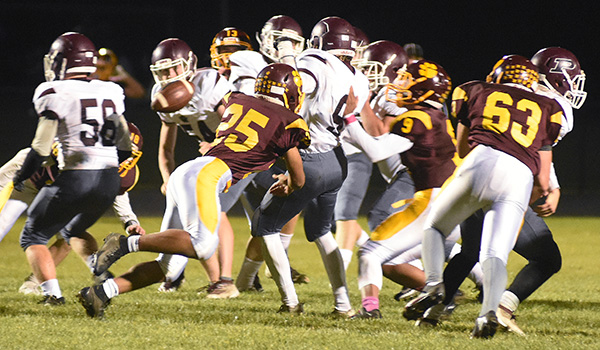 Brandywine’s Ivory McCullough (25) forces a fumble by Parchment’s Chase Covell on a kickoff in the Bobcats’ 57-35 win over the Panthers Friday night. (Leader photo/SCOTT NOVAK)

NILES — It was a record-setting senior night for the undefeated Brandywine Bobcats at Selge Field Friday night.

In a game that featured a little bit of everything, including multiple on-side kickoff recoveries by visiting Parchment and a fumble returned for a touchdown by the Panthers, it was the Bobcats that came away with a 57-35 victory.

Abrams, who ran for 169 yards on 19 carries, became the first Brandywine running back to reach the 1,000-yard milestone in three consecutive seasons. Abrams also had a touchdown run of two yards.

Brown, who caught five passes for 134 yards and four touchdowns, surpassed Matt Kidwell for most touchdown receptions in a single season with 13. Brown’s touchdowns came from 57, 15, 23 and four yards out.

Gouin, who was 6-of-10 for 138 yards and the four touchdowns, passed Andrew Duckett for most touchdown passes in a single season with 22. Gouin also ran for 71 yards on 10 carries. He scored on a pair of touchdown runs, measuring eight and 13 yards respectively.

Brock Prenkert scored the other Brandywine touchdown on a one-yard run.

The Bobcats finished with 488 yards of total offense, including 315 rushing.

Parchment had 385 yards of total offense, including 222 yards passing. The Panthers’ 35 points are more than the Bobcats had given up the entire season. Entering the game Brandywine had only allowed 33 points.

Zelmer accounts for four touchdowns in Buchanan rout of Comstock

COMSTOCK — Levi Zelmer threw for three touchdowns and ran for another as visiting Buchanan routed Comstock 41-6 in a... read more